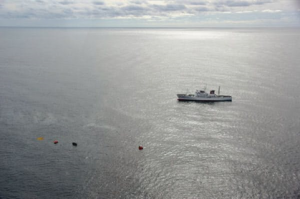 All national papers reported extensively on yesterday’s accident involving a Japanese Fisheries Agency patrol ship and a large North Korean trawler in waters 350 km northwest of the Noto Peninsula in Ishikawa Prefecture. A total of 60 fishermen were thrown into the sea when their ship sank after the collision, but they were rescued unhurt by the crew of the Japanese vessel. All of the fishermen were transferred to another DPRK ship that subsequently left the scene. No injuries were reported among the Japanese crew. The collision allegedly occurred when the Japanese ship was issuing a warning not to engage in fishing in Japan’s EEZ. The Fisheries Agency justified its decision not to detain the crew members by saying that the patrol’s original mission of preventing DPRK fishermen from engaging in illegal fishing was accomplished.

The dailies said Japan has recently been stepping up its patrol operations in the area, which is a prime squid fishery, as fishermen from North Korea and other countries have been actively engaged in illegal fishing there. Although Prime Minister Abe said at the Diet yesterday that the GOJ will deal with illegal fishing in the area “resolutely,” Yomiuri noted that some GOJ officials are concerned that arresting DPRK fishermen could complicate relations with the Kim regime.

Mainichi speculated that Pyongyang may take issue with Japan’s handling of the incident, possibly asking for compensation for the loss of the boat or talks on fishing in the area. The daily said the issue of illegal fishing poses an additional obstacle to ongoing efforts to normalize relations with Pyongyang by resolving the abduction issue and achieving denuclearization.