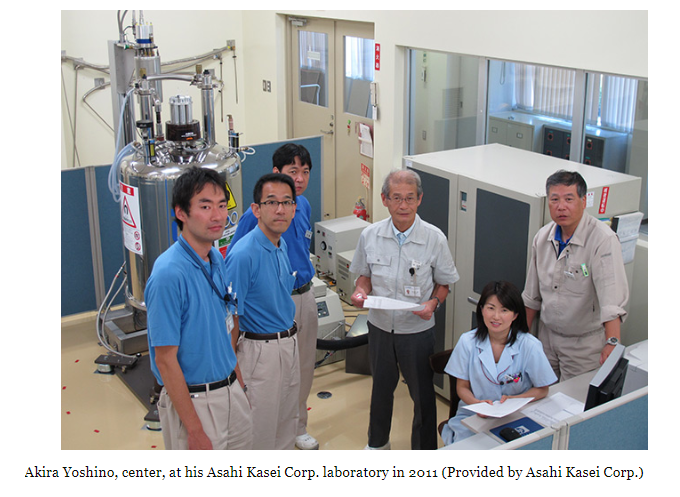 In summing up the reason for awarding this year’s Nobel Prize in Chemistry to three researchers, the Royal Swedish Academy of Sciences said, “Lithium-ion batteries have revolutionized our lives since they first entered the market in 1991. They have laid the foundation of a wireless, fossil fuel-free society, and are of the greatest benefit to humankind.”

This is clearly an achievement that is suitable for the spirit of the prize, created by the will of Swedish dynamite inventor and businessman Alfred Nobel.

The comment eloquently explains the value of the technological breakthrough that Nobel winners have pulled off.

Akira Yoshino, an honorary fellow with Asahi Kasei Corp., is one of the three co-recipients of the prize for developing the basic technology of rechargeable lithium-ion batteries.

Yoshino has been rewarded for creating the first commercially viable lithium-ion battery in 1985.

Lithium-ion batteries offer high energy density, which means they can be powerful even if they are small in size. This type of battery is essential for a wide range of mobile devices, such as smartphones and laptops.

The technology is also used as a power source for electric vehicles and has the potential to store power generated by solar, wind and other renewable energy sources for a stable supply of clean energy.

In addition to radically changing people’s lifestyles, the battery technology can also contribute greatly to building a low-carbon future for the world.

No such technological breakthrough can be achieved overnight. But the story of Yoshino’s efforts leading to the success offers many valuable insights into scientific research.

On joining Asahi Kasei in 1972, Yoshino was assigned to the company’s research lab. He was allowed to pick any subject of research under the company’s strategy for creating new businesses for plastics.

But he spent his first nine years at the firm without producing any achievement to show for it.

In 1982, inspired by a paper authored by John Goodenough, the U.S. co-recipient, and others, Yoshino obtained a vital clue to the development of the new battery technology.

But he had to spend nearly 10 more years on further research before he developed a practically usable lithium-ion battery.

Yoshino’s talent and strenuous effort led to the great innovation because he was supported by a research environment that allowed researchers to engage in long-term efforts without feeling pressure to produce quick results.

The story appears to underscore the basic strength of Japanese companies. But there is no room for complacence because the landscape of corporate research is changing radically at the moment.

Fiercer competition due to globalization is putting great pressure on companies and their researchers to develop new products in short cycles while tackling the challenge of meeting increasingly diversified needs among consumers.

As limitations to the traditional approach to product development, which is driven basically by in-house research, are becoming clear, a growing number of companies are embracing the so-called “open innovation” formula, which involves harnessing technologies, expertise and human resources outside the company to develop new products and technologies.

Apple Inc., known for its gee-whiz gadgets including the iPhone, is one notable example.

But this method does not work unless you have your own technology and expertise that can be the core of new products.

Simply trying to combine existing technologies and ideas to cook up new products does not lead to real progress in science and technology.

Yoshino’s Nobel Prize has come as a fresh reminder of the importance of pursuing truly original creations. This is also true with basic research by companies.

Researchers of today, especially young ones, who are under strong pressure to produce results quickly, are probably envious of the research life that Yoshino has led.

As our editorials have repeatedly argued, the government needs to do more to tackle this problem by improving and enhancing the research environment if Japan is to keep producing Nobel laureates for decades to come.