TOKYO — Japanese auto parts suppliers are ramping up their research and development spending as they aim to secure viable futures for themselves in a rapidly changing industry.

The combined annual R&D spending by the top 16 Japanese makers of auto parts is growing steadily, and is projected to hit 1 trillion yen (about $93 billion) in 2022, which would be double that of 10 years earlier.

Auto parts makers are in a race to create new technologies and services that will help them survive in the new era emerging in the auto industry epitomized by the acronym CASE.

CASE encompasses the four transformative trends of connectivity, autonomy, sharing and electrification. Industry executives and analysts call this change the biggest revolution in car manufacturing since the Ford Model T.

The age of CASE will render many car parts obsolete, including engine components. This industry shift presents a life-or-death challenge for many parts suppliers.

By 2035, electric vehicles will constitute 30% of global passenger car sales — in 2017, this figure was only 1% — according to an estimate by Boston Consulting Group. CASE-related products and services will account for 40% of the overall profits generated by the global auto industry in 2035, the group predicts. 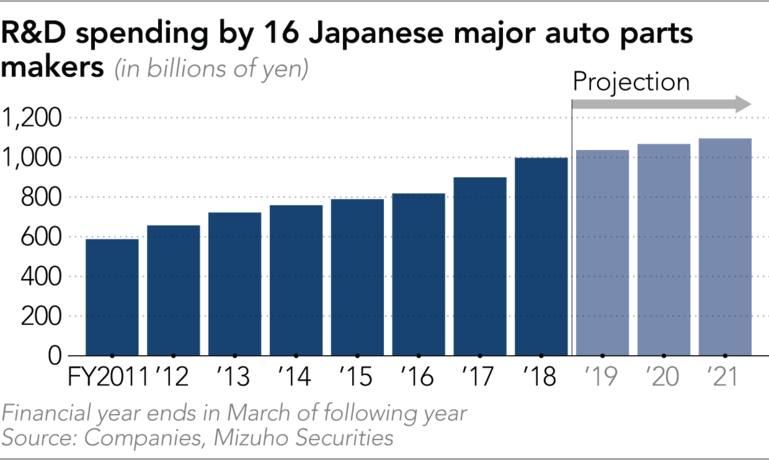 “We cannot take for granted that we will have long-term viability,” said Kiyotaka Ise, president of Aisin Seiki, a major car parts manufacturer based in Aichi Prefecture, home to Toyota Motor. “This era poses a severe challenge to us.”

Aisin is a highly competitive supplier with a long list of loyal customers, most notably Toyota. If a supplier as big as Aisin has concerns about its future, then every business should be worried about their prospects.

Currently, Aisin’s R&D focus is on the development of drivetrain components for electric and hybrid vehicles as well as integrated control software for self-driving cars.

The EV revolution is set to completely change engine components and products related to drivetrains and vehicle control systems. EVs use far fewer of these products than conventional cars. Auto parts for drivetrains and control systems made up some 40% of Japan’s overall domestic shipments in fiscal 2017, which ended in March 2018, according to the Japan Auto Parts Industries Association. Leading suppliers include Aisin, Keihin, F.C.C. and Musashi Seimitsu Industry.

With total R&D spending by Japan’s 16 largest auto parts makers, including Denso, Aisin and Toyota Industries, set to double in the 10 years to March 2022, according to Mizuho Securities, many of these companies are working hard to develop CASE-related products such as radar for autonomous driving and electric drivetrains for EVs.

But these massive investments in R&D will not guarantee that these parts makers will still be in business 10 years from now. Simply put: R&D spending by Japanese auto parts makers is far less than such spending by major parts makers elsewhere in the world. The smaller war chests of Japanese players are a reflection of their comparatively smaller cash flows.

This can be seen in the chart that plots the competitive positions of companies. In the vertical axis are the annual average free cash flows of parts makers over the five years through the 2018 business year. On the horizontal axis are the five-year averages of the ratios of R&D spending to sales.

Germany’s Continental, for instance, generated an annual average free cash flow of $2.6 billion and spent an amount equivalent to 7% of its sales on R&D over the period.

Meanwhile, Aisin generated a free cash flow of $300 million and spent less than 5% of its equivalent sales on R&D.

Still, thanks to its association with Toyota, Aisin is still in a healthier position to compete with foreign giants than are its domestic rivals, who serve mainly Honda Motor or Nissan Motor.

In the age of CASE, the competitiveness of Japanese auto parts suppliers in the global market will depend greatly on how efficiently they can use their limited R&D budgets to develop competitive products and technologies.