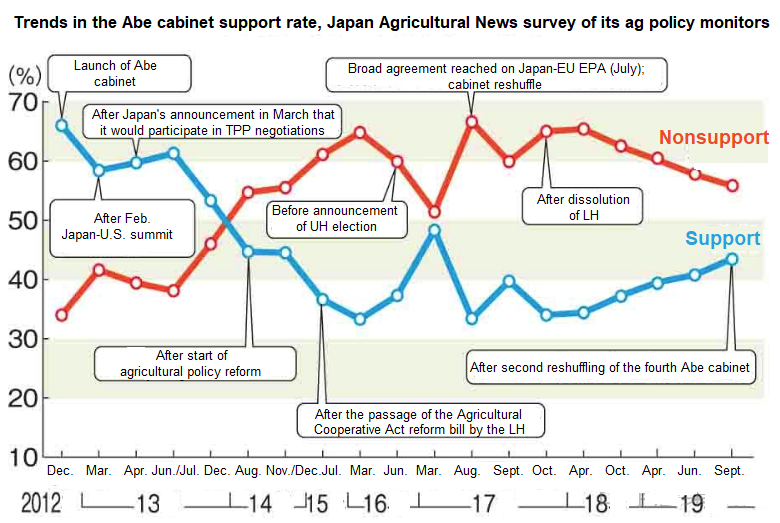 The poll was taken around the time the United States and Japan reached a final agreement on their trade negotiations. Some 66.3% of respondents said that the negotiations produced “an outcome advantageous to the United States.” This figure is thought to indicate great dissatisfaction with the agreement. Under the agreement reached on Sept. 26, no deadline was set for the removal of U.S. tariffs on autos, while Japan lowered tariffs on beef and other items to be on a par with those in the Trans-Pacific Partnership (TPP) trade pact and exempted the U.S. from the reduction or removal of tariffs.

[The TPP 11, whose member nations include Australia, New Zealand, and Canada, came into effect in December last year, and member nations’ products have started to be imported into Japan at low tariffs.] The poll probed views on how the enforcement of the Japan-U.S. trade pact in addition to the TPP 11 will impact domestic agriculture. A total of 78.9% said “there will be a greater impact on domestic agriculture than there is currently,” including 51.2% who said “a considerably greater impact” and 27.7% who said “a somewhat greater impact.” This suggests there is great anxiety over trade policy, and it is imperative that domestic countermeasures are enhanced.

The mail-in poll was conducted from mid- to late September of the Japan Agricultural News’ 1,024 agricultural policy monitors, most of whom are farmers. A total of 647 responses were received. (Abridged)