New government organizations to be formed to oversee economic security

Several new organizations related to diplomacy and security in the field of the economy will be set up within the government to prevent the outflow of technology from Japan. The government will create a division in the National Security Secretariat (NSS) to oversee these issues, and the foreign and defense ministries will also restructure parts of their organizations. As the competition to dominate “5G” next-generation communications intensifies between the U.S. and China, there are more and more cases intricately linked to both the economy and security. These new government offices will address these changes in the international context.

The government will establish a division specialized in economic affairs at the NSS. The NSS is the control tower for diplomatic and security policies [and is under the Prime Minister’s Office (Kantei)]. The Ministry of Economy, Trade and Industry has traditionally played the central role in economic affairs, but it has become difficult for a single ministry to handle matters involving both economic and diplomatic security. By creating a new division, the administration intends to strengthen the coordination functions of the Kantei.

Currently, there are six teams in the NSS: the “general affairs and coordination team,” the “information team,”  the “strategy and planning team,” and three regional teams, including those for the U.S. and Europe, Northeast Asia and the Middle East. The administration will decide whether to place the new team under the “strategy and planning team” or to create a new team which would stand alongside the existing six teams. It is also still undecided when the new team will be set up, but a NSS senior official said, “We want to create a new team as soon as possible.”

Effective Oct. 1, the Ministry of Foreign Affairs established the “Emerging Security Challenges Division” under the National Security Policy Division of the Foreign Policy Bureau. The new division is in charge of cyberdefense and preventing the outflow of advanced technology.

The government formed the new division because it expects that more and more importance will be placed on coordination with other countries to develop international rules on cyberspace and prevent advanced technology from draining out of the country. MOFA’s Space and Cyber Policy Division used to handle cyber affairs, but the ministry integrated space affairs into the Space and Maritime Security Policy Division.

The Defense Ministry will create the position of “logistics safety administrator” under the Acquisition, Technology & Logistics Agency (ATLA). The government aims to enhance information security in the defense industry and prevent technology drain associated with the export of defense equipment overseas. The ministry earmarked the costs of stationing a new official in its fiscal 2020 budgetary request.

In the upcoming reorganization, ATLA will consolidate the “technology control office,” which is in charge of preventing technology outflow, and the “contract information security planning office,” which administers confidentiality contracts concluded with the defense industry. The new office will have about 30 members. 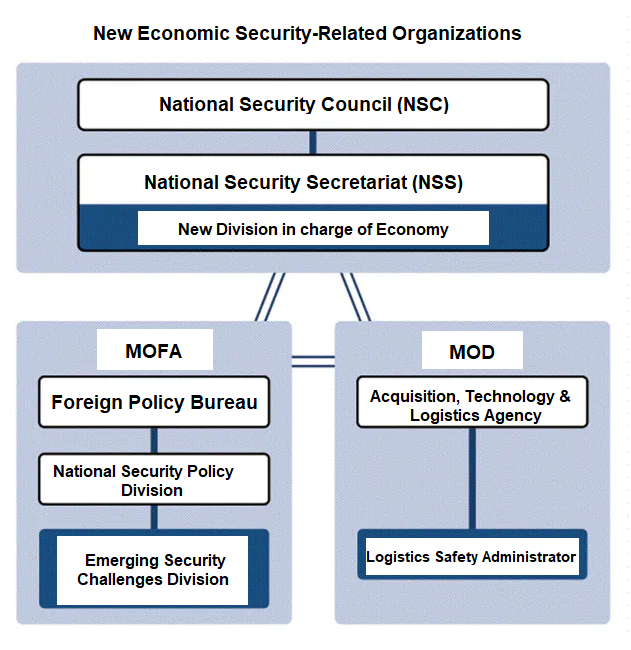 The U.S. is very concerned about economic security, and this has led to this series of reorganizations within the Japanese government.

There are marked differences between the West and China in regard to the digital economy. In China, the government spearheads the control of personal information. The U.S. has been calling on its allies not to use Chinese products in the development of their 5G infrastructure.

In the U.S., the “National Economic Council” (NEC) develops strategy on the economy, diplomacy, and security. The “parliamentarians’ league on rule-making strategies,” which is led by LDP Research Commission on the Tax System Chairperson Akira Amari, is proposing that Japan establish its own version of the NEC.

One of the challenges to creating a Japanese NEC is to secure talented human resources. The government lacks cyberspace specialists and so is considering hiring people from the private sector. Hiring such experts may be difficult, however, because they have a higher salary than government officials.

The U.S. is said to be concerned about Japan’s information security system. The U.S. and the EU have “security clearance” systems, which restrict the number of people who can access important government information. Some in the Japanese government are calling for the introduction of such system.