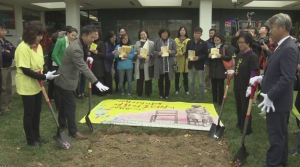 NHK reported online that a group of Korean Americans announced on Thursday that it will install a statue of a girl symbolizing the former comfort women on private land in Fairfax County, Virginia. They made the announcement at a ceremony marking the start of the installation work. The group is planning to erect the statue as early as next week and invite a former comfort woman from South Korea to its unveiling on Oct. 27. The leader of the group said the statue is intended to have people reflect on the tragic history of Japan-South Korea relations and to remember the victims of war. NHK commented that the statue could become another source of friction between Japan and South Korea. In response to the group’s plan to erect a statue on public land in Washington, DC, the Japanese Embassy in Washington is trying to persuade local officials not to permit its installation. The network noted that similar statues have been installed in Georgia and California.