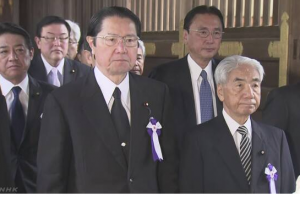 NHK reported that a group of 98 lawmakers from the LDP, the Democratic Party for the People, and the Japan Innovation Party visited Yasukuni Shrine on Friday morning for its autumn festival. The group customarily visits the shrine during its spring and autumn festivals and on Aug. 15, the anniversary of the end of WWII. State Minister for Agriculture, Forestry and Fisheries Kanji Kato, Parliamentary Vice-Minister for Foreign Affairs Shinichi Nakatani, and Parliamentary Vice-Minister of Defense Kazuchika Iwata were among the group of lawmakers.