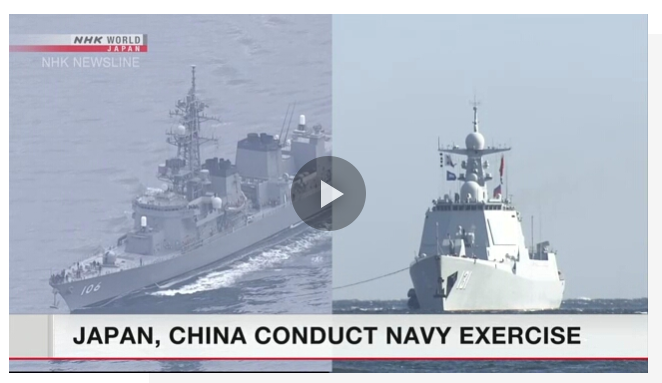 Japan’s Maritime Self-Defense Force says it has conducted goodwill exercises with China’s navy for the first time in eight years.

MSDF officials said the Japanese destroyer Samidare and the Chinese guided-missile destroyer Taiyuan participated in the drill. They said the exercise took place in waters south of Japan last Wednesday.

The two vessels reportedly tested radio communications and other coordination procedures while sailing side by side.

The two countries’ first goodwill drill since 2011 was scheduled to coincide with the Chinese warship’s visit to Japan.

Taiyuan — which is the first Chinese navy ship to visit Japan in a decade — was supposed to take part in an international fleet review of Japan’s Maritime Self-Defense Force.

But the fleet review was cancelled due to Typhoon Hagibis, which swept through Japan earlier this month.

The goodwill drill is being seen as the latest attempt by the two countries to revive defense exchanges, which were suspended due to tensions regarding the Senkaku Islands. Japan controls the islands. China and Taiwan claim them.

In April, for the first time in more than seven years, Japan sent an MSDF vessel to China to take part in the country’s fleet review.

MSDF officials say they will keep an eye on China’s maritime activities, but they say they also hope to build a relationship of trust with the Chinese navy through exchanges.