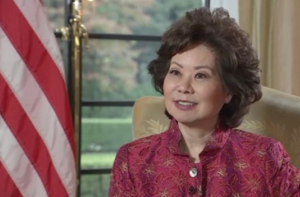 Explaining that representatives of 191 nations and international organizations participated in the imperial enthronement ceremony, TBS said Secretary of Transportation Chao, who represented the United States, gave an interview to the Japan News Network. During the interview, the Secretary said: “Japan introduced the charm of its tradition and culture to the world.”

Secretary Chao was shown saying: “Everything is done so flawlessly, steeped in history and tradition. By having something like this ceremony open to the public by television with all these important guests, it really teaches the world a great deal about Japan.”

The network said the Secretary explained that she had been looking forward to participating in the ceremony because she had heard how wonderful Japan’s traditional ceremonies are from former Vice President Quayle, who participated in the previous enthronement ceremony in 1990 when she was serving as Deputy Secretary of Transportation under the George H. W. Bush administration.

Secretary Chao was shown saying: “I think the name of the new era is so positive and optimistic. It’s the age of harmony. I think it is very indicative of the wish of our country in having a relationship with Japan.”

The broadcaster added that the Secretary said the United States itself has experienced damage from a number of hurricanes in the past and expressed her heartfelt condolences to the victims of the recent typhoon. She also reportedly said she hopes that U.S.-Japan relations will develop further in the Reiwa era.