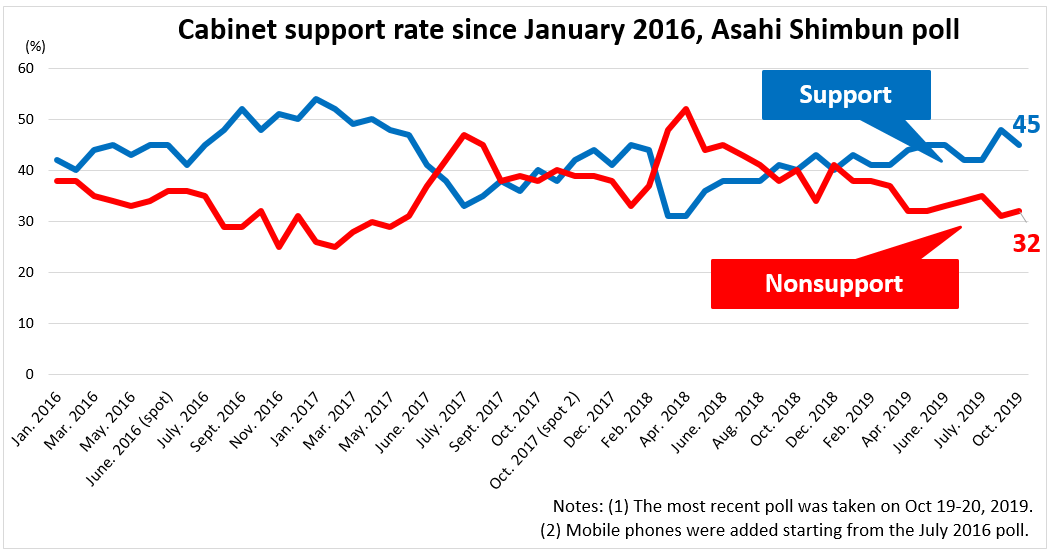 In the nationwide (telephone-based) public opinion poll conducted by the Asahi Shimbun on Oct. 19–20, more respondents said that they support the consumption tax hike than said they do not, 54% to 40%. The Abe administration raised the consumption tax to 10% on Oct. 1. Also introduced at that time was a reduced tax rate system under which the tax on food and the like was kept at 8%. Some 58% said that they approve of the reduced tax rate framework while 33% said they do not.

Some 74% of LDP supporters said they back the recent tax hike. Independents, however, were split, with 44% saying they support the rise and 47% saying they do not.

In the April 2014 survey conducted after the tax rate was raised to 8%, a total of 64% said that the tax hike is placing either “a considerable burden” or “some burden” on their household budget, while a total of 33% said it is placing “not much burden” or “no burden at all.” It must be kept in mind, however, that the polling methodologies differed in the two polls.

Asked how concerned they are that the tax hike will have a negative impact on the economy, a total of 61% said they are either “very” or “somewhat” concerned. A total of only 37% said that they are “not very” or “not at all” concerned. The poll also sought respondents’ views on how the consumption tax should be handled going forward. Given five options to choose from, 47% of respondents said that the consumption tax “should be kept at 10%,” making this the most frequently given response. Some 14% said that it “should be reduced to 8%” while 12% said it “should be raised to over 10%.”

[Polling methodology: The survey was conducted on Oct. 19–20, 2019, on a computer-aided random digit dialing (RDD) basis targeting voters nationwide with telephone calls placed by pollsters to landline and mobile phone numbers. Valid responses were received from a total of 2,029 persons, including 974 persons (out of 1,924 households found to have one or more eligible voters) for landline numbers and 1,055 persons (out of the 2,321 persons found to be eligible voters) for mobile numbers. The valid response rates were 51% for landline numbers and 45% for mobile numbers.]