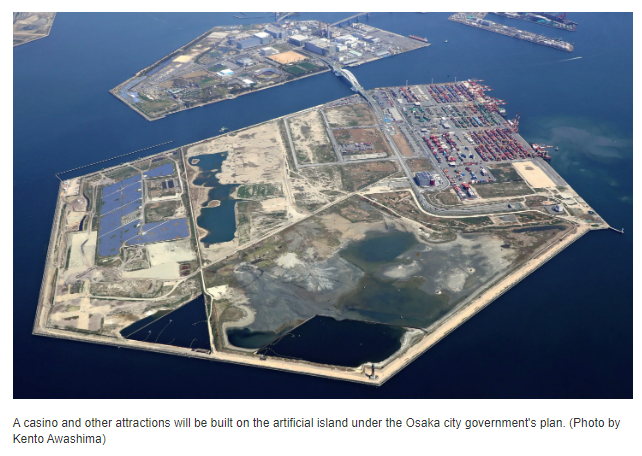 OSAKA — The city of Osaka will construct a ship terminal on an artificial island by around 2024, making it easier to reach a casino slated to open there.

To be built on the harbor island of Yumeshima as a first step toward the casino resort, the terminal will accommodate vessels as large as 1,000-passenger cruise ships. The plans were revealed Friday.

In addition, the link will help with transporting workers and materials for construction on the island, which will also be the site of the 2025 World Expo.

The plan addresses complaints that the casino will be difficult to access from Kansai Airport and the city center. The terminal may be completed before the 2024 target, according to city officials.

The terminal will be built on the island’s north end, which is near the planned casino resort — an area also protected from heavy surf.

A policy paper issued Friday by the city details plans for land use on the island and transportation links. An official plan will be drawn up in December after a public comment period.

A bridge now connects the island to central Osaka. The city also plans to extend a subway line via a tunnel. “Securing access to Yumeshima is essential — one subway line probably isn’t enough,” said an official at Hong Kong-based Galaxy Entertainment Group, which is vying to run the casino resort.