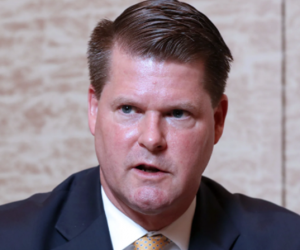 Saturday morning’s Nikkei front-paged an interview with DOD Assistant Secretary Randall Schriver, in which he commented on the continued social unrest in Hong Kong. While expressing hope for the Hong Kong government to heed legitimate demands made by protestors, the Pentagon official said the U.S. is concerned that Beijing’s iron-fist posturing will further undermine Hong Kong’s autonomy. On the massive military parade that the Chinese staged on its national day on Oct. 1, A/S Schriver said it was used to deflect attention from the nation’s economic slowdown.

With regard to the GOJ’s intention to deploy military assets to the Middle East, the DOD official reportedly voiced gratitude to Japan for making a decision that was satisfactory to the United States. He projected that Japanese maritime operations in the region will be carried out in coordination with the U.S.-led coalition.