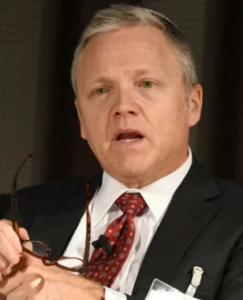 Saturday evening’s Nikkei front-paged remarks made by Senior Advisor to the Vice President Tom Rose during a panel discussion at the Mount Fuji Dialogue earlier in the day. He reportedly said the United States is “with the citizens of Hong Kong,” voicing support for its pro-democracy movement. He reportedly went on to say: “Hong Kong and Taiwan stand as examples of a different and better way for the Chinese people to govern themselves.” Rose also reportedly emphasized that the U.S. is committed to deterring military conflict with China by “outpacing her military modernization.” He was also quoted as saying: “We can help downgrade the credibility of the Chinese Communist Party by winning back our technological leadership and showing the world the superiority of our open and free way of life.”