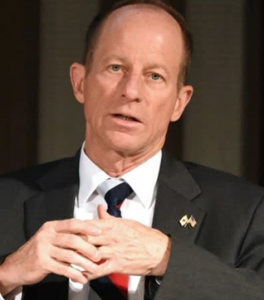 The Sunday editions of all national papers except Asahi took up a press briefing on Saturday by Assistant Secretary of State Stilwell, focusing on his call for the Moon administration not to terminate military intelligence sharing with Japan by going ahead with its plan not to extend the GSOMIA arrangement beyond Nov. 22. Nikkei quoted him as saying: “The United States will continue to encourage these two critical allies to resolve bilateral frictions…. [We will] bring the two sides together and encourage both to take a larger view of this issue. This is a security issue. It affects all three of us.” A/S Stilwell reportedly stressed that speedy defense data exchange between the U.S., Japan, and South Korea is useful and that all parties are aware of the importance of trilateral coordination on this front. The papers added that A/S Stilwell is expected to visit Seoul on Nov. 5.

According to Yomiuri, A/S Stilwell also voiced concern about the dispute between Tokyo and Seoul over export controls. He reportedly stressed that security cooperation must not be affected by economic issues by saying: “Let’s not let economic issues spill into security.”

As for Japan’s intention to deploy military assets to the Middle East for naval security operations, A/S Stilwell was quoted by Nikkei as saying: “We certainly very much appreciate Japan’s decision to contribute as much as possible. Clearly the U.S. has interests in making sure there’s stability in the Middle East.”

A/S Stilwell also reportedly commented on U.S.-DPRK relations by saying that the Trump administration will continue to put more pressure on North Korea to achieve denuclearization. He added that Washington is “very much aware” of the threat North Korea’s ballistic missile program poses to Japan. According to Yomiuri, the USG official reportedly declined to specify to what extent the Trump administration is willing to tolerate North Korea’s provocations, such as repeated launches of short-range ballistic missiles. He was quoted as saying that red lines should remain “ambiguous.”

Meanwhile, Saturday’s Sankei wrote that upon his arrival at Narita Airport on Friday to take part in the Mount Fuji Dialogue, A/S Stilwell told the press that the U.S.-Japan alliance is “the most important in the world and the cornerstone of regional security in the Asia-Pacific region.”