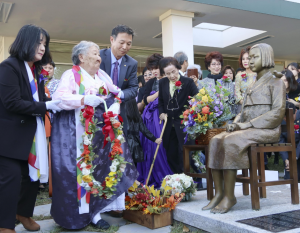 NHK reported that on Sunday a group of Korean Americans unveiled a statue of a girl symbolizing the former comfort women on private land in Fairfax County, Virginia. At the ceremony, the head of the group stressed the significance of the statue’s proximity to Washington and called on the Japanese government to offer a sincere apology and compensation for the victims of wartime sexual violence. A former comfort woman from South Korea read aloud a poem composed by the group. She criticized the Japanese government for “depriving her of her youth and dreams.” According to the group, the statue is the fifth of its kind in the United States. The Japanese Embassy in Washington has been calling on local officials not to approve plans to set up additional statues in public spaces. The network said this statue erected on private land could become another source of friction between Japan and South Korea.