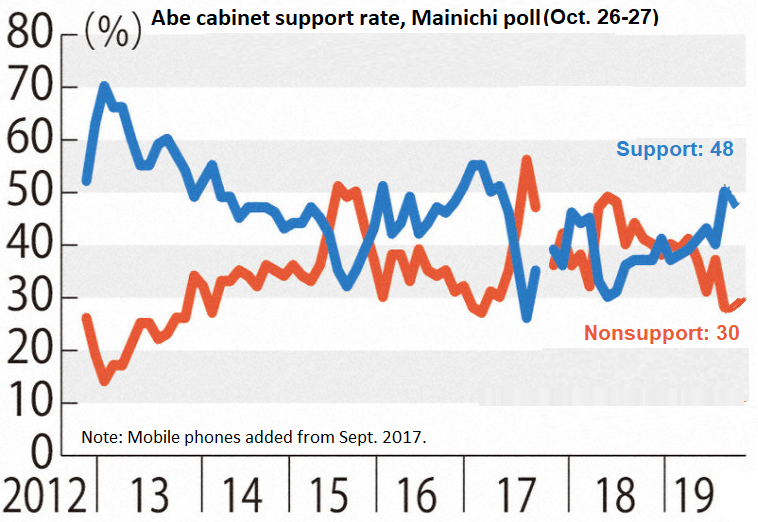 TOKYO — Nearly half of respondents to a recent Mainichi Shimbun survey are against moving the 2020 Summer Olympics’ marathon and race-walking events from Tokyo to Sapporo — a plan announced recently by the International Olympic Committee (IOC) to avoid searing heat in the capital.

The Mainichi Shimbun conducted a nationwide survey on multiple issues on the weekend of Oct. 26-27. Altogether, 47% said they were against the plan to move the events to Sapporo in Japan’s northernmost prefecture of Hokkaido, surpassing the 35% who supported the IOC’s plan. Eighteen percent declined to respond.

[A total of 48% said that they support the cabinet of Prime Minister Shinzo Abe, while 30% said they do not and 19% said that they are not interested in the matter. These figures are essentially unchanged from the previous poll conducted on Sept. 14–15.]

The survey separately asked people about how they feel about Emperor Naruhito, who proclaimed his enthronement during the Sokuirei-Seiden-no-gi enthronement ceremony on Oct. 22. A total of 26% said they have a “favorable impression” of the new Emperor while 25% viewed him with “fondness.” Fourteen percent said they think he is “venerable” and 3% feel “a sense of awe” toward him. One percent said they opposed him, 9% said they didn’t have any particular opinions about him, and 6% said they didn’t care. The percentage of those who think he is venerable was up 5 points from the previous survey in May this year right after he became the new Emperor of Japan.

The survey also asked people about the Cultural Affairs Agency’s decision to withdraw subsidies to the international arts festival Aichi Triennale 2019 after a statue symbolizing wartime “comfort women” was pulled from display at the controversial “After ‘Freedom of Expression?'” exhibit. The reason given for withdrawing subsidies was that there were “technical errors” on Aichi Prefecture’s part. Altogether, 39% said the agency’s decision was inappropriate while 36% said it was appropriate. Twenty-four percent did not comment on the matter. The Aichi Prefectural Government has filed a complaint with the agency based on the law related to appropriate operation of subsidies and demanded nullification of the agency’s decision.

On the souring relationship between Japan and South Korea over issues such as Japanese companies’ compensation for wartime forced labor, 46% believe the two neighboring countries should strengthen their ties for the stabilization of Northeast Asia, 10 points more than those who said such efforts are unnecessary.

On the issue of multiple Kansai Electric Power Co. executives receiving gifts worth hundreds of millions of yen (a few million U.S. dollars) from an official of Takahama, Fukui Prefecture, where one of the utility’s nuclear power plants stands, 58% said their confidence in the nuclear power business had been shaken, while 23% answered theirs had not.

The Mainichi’s survey targeted people across the country using the respondent driven sampling method, with phone numbers — both landline and mobile — created randomly by computers. The survey received responses from a total of 1,013 people (482 on landlines and 531 on mobile phones).