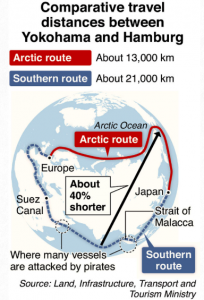 The government aims to develop a system to support safe navigation of ice-covered areas in the Arctic Ocean, with an eye on taking advantage of a shipping route through the ocean, it has been learned.

The envisioned system will be developed in parallel with designs for a new research icebreaker earmarked for construction. The move is intended to counter measures by China and Russia, among other countries, which have been stepping up efforts to gain an edge in the Arctic Ocean.

Currently, the Mirai, a vessel operated by the Japan Agency for Marine-Earth Science and Technology (JAMSTEC), carries out observations and research mainly in the Arctic Ocean.

However, these activities are limited mostly to summertime because the vessel was not constructed for heavy icebreaking. This has prompted the government to consider building a vessel with better icebreaking capabilities as well as a support platform to improve navigational safety in the Arctic.

The envisioned system will detect ice on the vessel’s path using radar and analyze its thickness, distance from the vessel and other factors. In addition, adaptive technology will attempt to predict the movements of ice floes and icebergs using satellite and other data, thus determining the most appropriate routes, with the additional benefit of helping vessels consume less fuel. In the future, the government plans to allow private shipping companies to take advantage of the envisioned system as an incentive to use the Arctic route.

The Education, Culture, Sports, Science and Technology Ministry, which oversees JAMSTEC, has been studying the construction of an improved icebreaker since fiscal 2017. In its fiscal 2020 budget request, the ministry included ¥650 million to create basic designs, including those for the envisioned navigation support system. The amount was 2.6 times larger than its request for the fiscal 2019 budget. The government aims to complete development in the latter half of the 2020s.

The Arctic Ocean has come to the fore as a possible shipping route because the amount of sea ice has declined in recent years due to global warming. When comparing routes between East Asia and Europe, an Arctic route would be about 40 percent shorter than going by way of the Strait of Malacca and the Suez Canal. An Arctic route would also negate the risks of pirate attacks that ships face in the Gulf of Aden off Somalia and other areas.

Many countries have shown interest in opening the Arctic Ocean to shipping. Russia, for example, restarted an Arctic base in 2014 that had been established during the Cold War, while China has been developing an Arctic route because the country considers the ocean an “Ice Silk Road.” It has been pointed out that Beijing is also looking to deploy submarines in the Arctic, according to a senior Defense Ministry official.

U.S. President Donald Trump once expressed his willingness to purchase Greenland, located between the Atlantic Ocean and the Arctic Ocean.