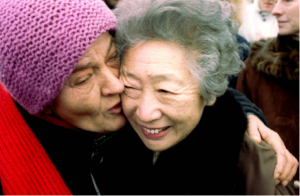 A Bosnian Serb from Sarajevo cries while hugging U.N. refugee chief Sadako Ogata at a camp in a northern suburb of Belgrade on Dec. 6, 1997. | REUTERS / VIA KYODO

Sadako Ogata, a high-profile Japanese diplomat who served as the first female United Nations High Commissioner for Refugees from 1991 to 2000, has died at 92, the government said Tuesday.

She died on Oct. 22, and a funeral was reportedly held at a church in Tokyo on Tuesday. The cause of her death was not immediately known.

News of the death of Ogata — known for her decisive, pragmatic leadership at the U.N. for years — immediately drew condolences from diplomatic and academic leaders across the world, including Prime Minister Shinzo Abe.

A scholar and mother of two, Ogata was among a handful of Japanese female leaders in world diplomacy, demonstrating her ability and leadership in carrying out critical humanitarian missions to save numerous refugees’ lives in Iraq, Turkey, Rwanda, the former Yugoslavia and other places around the globe. She made numerous visits to conflict zones.

“Ms. Ogata … was consistently at the front line of humanitarian and development support, always showing compassion to those who were suffering,” Abe said in his message.

He commended her for being “one of the early advocates of the concept of ‘human security’” and said she would be mourned with “heartfelt respect and deep gratitude.”

From 2003 to 2012, Ogata served as president of the Japan International Cooperation Agency. She also served as an adviser to the organizing committee of the 2020 Tokyo Olympic and Paralympic Games.

Ogata began her stint at the U.N. refugee agency as civil conflicts and ethnic cleansing erupted in the former Yugoslavia and in Rwanda.

In her book, “The Turbulent Decade — Confronting the Refugee Crises of the 1990s,” Ogata described her decadelong career at UNHCR during a period of constant humanitarian crises, in which the “UNHCR worked like fire brigades through all the continents of the world.”

“My life at the time was like being on a merry-go-round, going around the world and seeing all sorts of people’s situations,” Ogata told The Japan Times in 2005.

In an era of tumult, Ogata, with her deft diplomacy and hands-on approach, won global respect not only from world leaders and U.N. staff but also from refugees — some of whom even named their children after her.

Ogata soon became known by the affectionate moniker the “diminutive giant,” mainly for her resolute decision-making during the Yugoslav civil wars.

In Japan, she became a paragon for international leadership — something Tokyo had been perceived as lacking at the time.

Ogata’s first book, from when she was a scholar in 1966, was an analysis of diplomacy surrounding the 1931 Manchurian Incident, in which Japanese troops staged a bombing as a pretext to invade northeastern China.

Before her appointment as High Commissioner, Ogata became a professor and later director of the Institute of International Relations at Sophia University, and in 1989 the dean of the Faculty of Foreign Studies at the same university.

“I am sorry about her death. I was shocked to hear that,” said Liberal Democratic Party lawmaker Kuniko Inoguchi, who came into contact with Ogata when they both held positions as professors at Sophia University.

“I respect her as a pioneer in humanitarianism,” said Inoguchi, who taught international politics at the university between 1990 and 2006. Her commitment to refugee issues, Inoguchi said, has galvanized the Japanese government to raise the priority of the nation’s refugee policy, including strengthening the support it receives.

Stephen Nagy, senior associate professor at International Christian University, said that he first encountered Ogata in 2003 when he was a second-year master’s student at Waseda University in Tokyo.

“Her intelligence, compassion and pragmatism left a deep impression,” recalled Nagy, who is also a visiting fellow with the Japan Institute for International Affairs.

“Being an advocate of human rights and for refugees, Ogata Sensei embodied the best of Japan and its postwar commitment to contributing to making the world a better place,” he added. He described Ogata as “an outstanding role model for women, Japanese people and for those who question the value of public service.”

On the pragmatic side, he said, “she also stressed that at different periods of life, professionals needed to prioritize work-family balance such that they could succeed in the professional and family domain.”

Born in Tokyo on Sept. 16, 1927, Ogata spent her early years abroad, including in the United States and China.

After becoming the first Japanese woman to represent her country at the United Nations, in 1976, Ogata served as the Japanese representative at the U.N. Commission on Human Rights from 1982 to 1985.