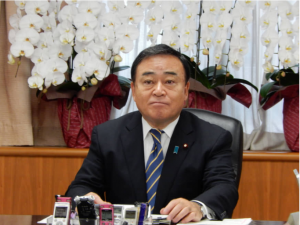 Japan is ready to take a leadership role in finalizing an Asian free trade deal by the end of the year, newly appointed trade minister Hiroshi Kajiyama said Tuesday, days after his predecessor stepped down over a gift scandal.

The negotiations for the RCEP, which would cover a third of the global economy, “is in the final stage,” Kajiyama said during a group interview with the media Tuesday afternoon. A ministerial meeting on the trade deal will be held in Thailand later this week.

“The point of the discussion has been narrowed,” said Kajiyama, 64. “I, as well as the Ministry of Economy, Trade and Industry, will do everything in our power to reach an agreement (by the end of the year),” adding that his participation in the upcoming meeting depends on the Diet schedule.

Negotiations on the RCEP began in 2013 and its members have been tackling 18 areas.

On tightening exports to South Korea that began in July, Kajiyama said inspection procedures are mostly unaffected, even though they require some time. Tokyo has imposed enhanced screenings on shipments of three key chemicals since the summer. Japan has a dominant market position in production of the chemicals, which are critical to the production of semiconductors.

The issue has quickly escalated into a source of major contention in deteriorating Tokyo-Seoul relations, as South Korea’s economy heavily relies on the semiconductor industry.

A trade report by Japan’s Finance Ministry showed no Japanese exports to South Korea in August for one of the three chemicals — hydrogen fluoride. METI disputed the report, saying it has “confirmed” the chemical was shipped to South Korea during that period.

The enhanced control serves as a reminder “for exporters that the procedure is not a mere formality,” he said.

The weekly Shukan Bunshun magazine reported last week that one of Sugawara’s secretaries earlier this month gave what is known as “incense money,” a monetary condolence gift at a funeral, to the family of a deceased supporter in his district. The gift was allegedly given under Sugawara’s name, which would be a violation of the Public Offices Election Act.

Prime Minister Shinzo Abe apparently picked Kajiyama with an eye toward stability, taking into account his experience of having already served in a Cabinet post, which was not on Sugawara’s resume prior to his appointment. The son of Seiroku Kajiyama, a former chief Cabinet secretary, Hiroshi Kajiyama was the regional revitalization minister under Abe from 2017 to 2018.

Kajiyama, like Sugawara, is known to be close to Chief Cabinet Secretary Yoshihide Suga. Abe’s choice may have been made to preserve Suga’s face within the party and chide any efforts to curb his influence following Sugawara’s departure. Liberal Democratic Party lawmakers view Suga as a viable candidate to succeed Abe when his tenure as party president ends in September 2021.