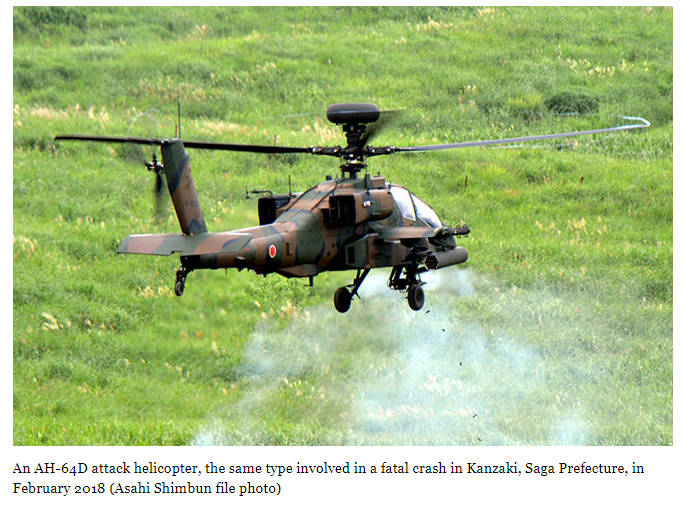 The Defense Ministry plans to resume flights in mid-November of attack helicopters of the same type that crashed in a residential area in Kanzaki, Saga Prefecture, in 2018.

Shunji Yoshino, commander of the Ground Self-Defense Force’s Camp Metabaru in the prefecture where the AH-64D helicopter involved was stationed, will visit the prefectural government office on Oct. 31 to convey the plan, sources said.

Yoshino and other officials will explain how helicopter maintenance and pilot training have been improved, as well as safety measures taken for the resumption.

The crash in February last year killed two crew members and injured a female elementary school pupil at her home.

The Saga prefectural government on Oct. 29 announced the scheduled visit by Yoshino and officials of the Defense Ministry’s Acquisition, Technology and Logistics Agency. The sources told The Asahi Shimbun about the nature of the visit.

According to the GSDF, AH-64D helicopters are stationed in Camp Kasumigaura in Tsuchiura, Ibaraki Prefecture, and Camp Akeno in Ise, Mie Prefecture, in addition to Metabaru.

Before flights of the helicopters are resumed, a high-ranking Defense Ministry official will visit the prefecture to seek further understanding.