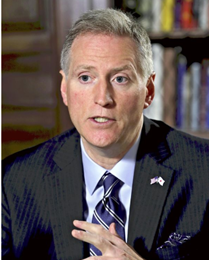 Saturday morning’s Yomiuri published an interview with Chargé d’Affaires Joseph Young. He commented on Japan’s intention to send an MSDF unit to the Middle East for intelligence collection by saying that “any kind of contribution is a very positive thing.” He also said that the U.S.-Japan trade agreements are a “win-win” deal that constitutes “a victory for consumers and producers alike in both of our countries,” expressing hope that the Diet will approve the agreements swiftly so they can take effect on Jan. 1. Chargé Young went on to say that the bilateral alliance is “reaching new heights” as a result of frequent meetings between President Trump and Prime Minister Abe and the steady deepening of security and economic cooperation.

With regard to relations between Japan and South Korea, the Chargé stated that the U.S. is willing to facilitate and encourage dialogue between the two nations, but added: “We don’t want to take the role of an arbiter or a judge.” He also disclosed that Washington has clearly conveyed to Seoul that the expiration of the GSOMIA would have an impact on U.S. security interests and stressed: “Our focus right now is keeping that agreement in place.”