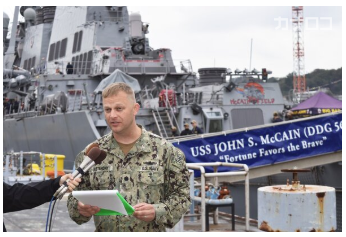 The USS John S. McCain Aegis vessel returned to the U.S. Navy’s Yokosuka base (Yokosuka City) on Nov. 3 after its first post-repair sea trials. In August 2017, the ship collided with a tanker in the Malacca Strait off the coast of Singapore, killing ten of its sailors.

In a press conference held at the base, the ship’s skipper, Cmdr. Ryan Easterday, explained, “We’re increasing the number of crew members and making many other efforts to prevent an accident.” He added, “We want to improve our ability to safely operate the ship by repeatedly conducting training.”

The ship was commissioned in 1994 and deployed to the Yokosuka base in 1997. The ship underwent repair work for about two years at the base after the 2017 accident. It left the base on Oct. 28 this year to conduct sea trials in several locations in Japanese coastal waters to check the ship’s communication systems. (Abridged)