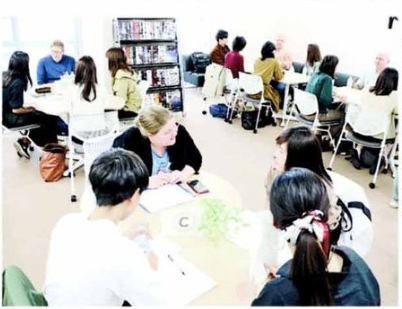 Diplomats and students exchange views about Japanese and American societies as well as peace education in Hiroshima.

On Nov. 6, the Prefectural University of Hiroshima invited five diplomats studying Japanese at the U.S. Department of State’s Foreign Service Institute Japanese Language and Area Training Center (Yokohama City) to its Hiroshima Campus (Minami Ward, Hiroshima City). The university held an event for the diplomats and 16 students to talk in Japanese about peace education in Hiroshima, Japanese culture, and the lifestyle of Japanese youth.

For the discussions, the participants broke into groups consisting of three or four students and one diplomat. Regarding peace education in Hiroshima, students talked about their experiences of visiting the Atomic Bomb Dome (Naka Ward) or listening to the testimonies of atomic bomb survivors. One of the students said, “Hiroshima has a sad history, but now many Americans are visiting Hiroshima and reflecting on peace.”

Participants in the event also had lively discussions on the issues of immigrants and poverty in the U.S. as well as the political awareness of Japanese young people and food culture in Japan. Yumi Tamura [spelling not confirmed], a 21-year-old junior at the university, said, “I learned not only about the current situation in the U.S. but also about differences between Japan and the U.S. and the challenges facing Japanese society.”

The diplomats are in their 30s to 50s. They are studying at the Japanese language training center in Yokohama from August this year through June next year before taking up posts at the U.S. Embassy or consulates across Japan. The exchange event was planned to coincide with the diplomats’ study tour to the city from Nov. 6 through the end of this week. Carmela Conroy, who heads the Japanese training center, said, “I want the diplomats to deepen their understanding of the history between our two nations in Hiroshima as well as Japanese culture and to allow this to inform their careers.”