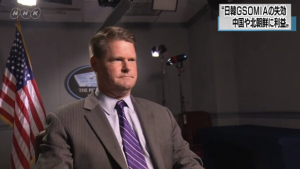 NHK reported on its one-on-one interview with Assistant Secretary of Defense for Asian and Pacific Security Affairs Schriver that was held in Washington on Wednesday. Concerning the ROK government’s decision to terminate GSOMIA, which expires in two weeks, the network showed him saying: “I would say in a more general way that South Korea-Japan tensions only benefit countries like Russia, China, and North Korea.” Assistant Secretary Schriver expressed the view that the termination of the pact would have a major impact on security cooperation between the United States, Japan, and South Korea in dealing with China and the DPRK. Assistant Secretary Schriver also said there is still time for South Korea to reconsider its decision and that Washington wants to have the opportunity to persuade Seoul to stay in GSOMIA for all its advantages. In response to the ROK government’s argument that it can share defense intelligence with Japan based on the existing trilateral information-sharing framework with the United States and Japan after the expiration of GSOMIA, Schriver said that three-way communication is cumbersome, less efficient, and suboptimal for the current security environment.