Olympics: Men’s marathon schedule to be moved ahead after Sapporo move 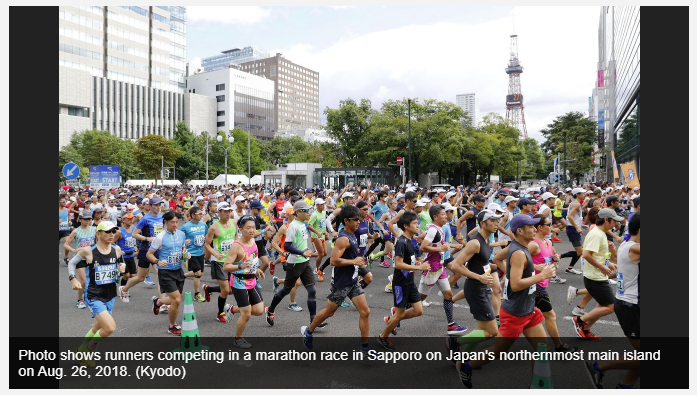 SAPPORO — Tokyo Games organizing committee chief Yoshiro Mori made it clear Thursday that the men’s marathon will be held ahead of its scheduled date of Aug. 9, the last day of next year’s Summer Olympics, owing to the event’s relocation to Sapporo in Hokkaido.

“It’s impossible (to hold the men’s marathon on Aug. 9) as there is the closing ceremony. The schedule will change greatly,” Mori said in a meeting with Hokkaido Gov. Naomichi Suzuki to discuss shifting the road races to the host city of the 1972 Winter Olympics.

Mori went to Sapporo to seek the cooperation of Suzuki and Mayor Katsuhiro Akimoto in devising new plans for the Olympic marathons and race walks following the International Olympic Committee’s decision to move the events amid concerns about Tokyo’s summer heat and humidity.

“We hope the organizing committee decides the schedule and course soon, and gives attention to reducing the impact on the lives of our citizens as they make arrangements,” Akimoto said.

While the men’s marathon has often been held on the last day of the Olympics, athletes would have to travel over 800 kilometers after the race in Sapporo in order to attend the closing ceremony in Japan’s capital, a task further complicated by the time required for doping tests and other procedures.

On Friday, organizing committee CEO Toshiro Muto will visit Sapporo and begin administrative talks as organizers rush to prepare for the events with less than nine months until the games.

“The marathon is the showpiece of the games,” Mori told the meeting with the governor. “I’d like to work together. I don’t want the expenses to be a burden on Hokkaido.”

Suzuki said, “There have been various issues, but I’ll put all my effort into making these games wonderful,” while adding, “It’s standard for the organizing committee to shoulder the cost.”

Organizers are also considering a proposal to hold the men’s and women’s marathons on the same day.

Last Friday, Tokyo Gov. Yuriko Koike reluctantly accepted the IOC’s decision following a publicized feud over the move, which was first announced on Oct. 16 after extreme heat resulted in many athletes dropping out of the athletics world championships in Doha, Qatar.