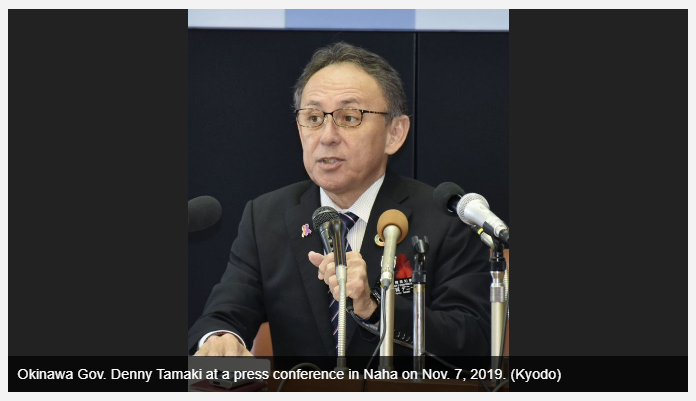 NAHA, Japan — A week after a fire gutted the historic Shuri Castle in Okinawa, the prefecture’s Gov. Denny Tamaki said Thursday, the local government will set up a panel of experts from various fields and a task force dedicated to drafting a restoration plan by the year 2022.

The panel will be made up of Okinawa government officials and outside consultants, while the task force, called a “strategic team for the restoration of the Shuri Castle,” will be directly controlled by Tamaki. The governor said the panel members are yet to be decided.

“We will respond with a sense of speed,” Tamaki told a press conference.

The main buildings of the castle, which was the symbol of the southern island prefecture and located at a World Heritage site, were burned to the ground on Oct. 31. Firefighters said an electrical system fault most likely set off the blaze.

The original Shuri Castle dated back to the Ryukyu Kingdom, which spanned 450 years until Okinawa was annexed by Japan in 1879. It was rebuilt after being destroyed in 1945, as Japan battled U.S. forces in World War II.

Tamaki set 2022 as the target year for the castle restoration plan to be completed, as that is when the prefecture will mark the 50th anniversary of its reversion to Japanese sovereignty from U.S. control following the war.

“We must bring together the people’s wisdom and thoughts toward the reconstruction and resurgence” of the castle, said Deputy Okinawa Gov. Kiichiro Jahana at the news conference.

The envisioned task force will draft a road map for the castle’s restoration, and formulate a framework of cooperation with the central government, which has promised financial aid.

Working groups under the strategic team will analyze the cause of the fire and study how to manage the facility better.

The blaze engulfed seven wooden buildings, occupying a total of more than 4,000 square meters on a hill overlooking the prefectural capital Naha. No one was injured in the predawn fire.

Even as police and firefighters remain on the scene examining the damage, the area around the castle’s entrance re-opened to the public on Tuesday.

Okinawa residents say they cannot allow themselves to remain depressed and have been encouraged by actions such as a donation campaign spreading throughout Japan for the castle’s reconstruction.

“We are truly thankful to everyone in the country for their cooperation. The sense of loss is great, but we want to rebuild (the castle) for the next generation,” said Reiko Kunigami, a 67-year-old social worker, as she looked up at the castle.

“Tourists cheer us up, saying ‘Hang on.’ Those words are really encouraging,” said a female staff member at the castle.

The desire to see the castle rise from the ashes was not confined to Okinawans alone.

“I am so sad to see the vivid red roof tiles so blackened (by the fire.) I would like to do whatever I can to help,” said Yuji Okazaki, 50, who was visiting from the western Japan prefecture of Okayama.

The castle was a major tourist spot in Okinawa, attracting about 2.8 million people in the fiscal year through March. The site is on the route of next year’s Tokyo Olympic torch relay.

The castle ruins, excluding restored buildings, were registered as a part of Japan’s 11th UNESCO World Heritage site in 2000.