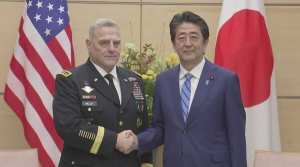 NHK reported online that Prime Minister Abe and Joint Chiefs of Staff Chairman Milley held talks at the Kantei on Tuesday morning. The network said that the two officials confirmed the importance of trilateral coordination between the United States, Japan, and South Korea in dealing with the DPRK and that General Milley welcomed Japan’s plan to dispatch SDF assets to the Middle East. According to the network, General Milley told reporters afterward that he exchanged views with Abe about the GSOMIA, saying that the issue will be addressed in his talks with South Korea officials tomorrow, and expressed hope that the issue will be resolved before the accord expires later this month.