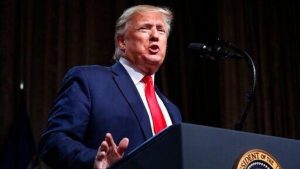 Asahi reported on a speech that President Trump delivered in New York on Tuesday in which he described the U.S.-Japan agreements on digital and agricultural trade as “historic” and said he is eager to launch the next round of trade negotiations with Tokyo for a comprehensive bilateral FTA. According to the article, the President also played up his successful lobbying of Prime Minister Abe to encourage Japanese corporations to invest in the United States. Recalling a conversation he had with the Japanese leader on an unspecified occasion, President Trump said he told the prime minister: “Shinzo. We have a tremendous problem. We have big deficits with your country. You’ve got to start building plants.” The President went on to say: “He’s building many, many car plants now in the United States that he would’ve never built here if you didn’t have this kind of a president. And he’s very happy to be doing it.”