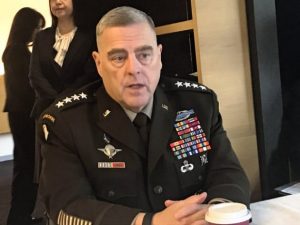 Nikkei reported on press remarks made in Tokyo this morning by Joint Chiefs of Staff Chairman Milley, who disclosed that during his upcoming visit to South Korea with Defense Secretary Esper, he will urge the Moon administration to maintain the GSOMIA military data sharing arrangement with Japan. “The expiration would benefit China and North Korea, which are anxious to drive a wedge between Japan and South Korea, South Korea and the United States, and the United States and Japan,” the general said. “An extension would serve the interests of the U.S., Japan and South Korea. Our message to the Koreans is ‘do not let it expire.’”

Asked by a journalist about President Trump’s criticism of the U.S.-Japan alliance as unfair, Chairman Milley reportedly said that military officials do not comment on remarks by civilian leaders, adding that the U.S.-Japan security relations are extremely solid. He stressed that the bonds between the two militaries are growing stronger as a result of joint training and integrated operations. On the possibility of deploying mid-range ballistic missiles in Japan, the top U.S. military official said “strict analysis” needs to be done to look into the possibility, adding that U.S. military assets would not be deployed “without coordination and approval” from Japan. At the same time, Chairman Milley noted that the United States and its allies must possess effective capabilities to counter China’s rapid buildup of missile forces.

Nikkei reported separately on a press conference by USFK Commander Abrams at Camp Humphreys on Tuesday, during which he commented on the Nov. 23 expiration of the GSOMIA military data sharing scheme. He was quoted as saying: “Without that, there is a risk of sending the wrong message that perhaps we are not as strong.” The general stressed the significance of the Tokyo-Seoul pact, saying that it was a “clear message to the region that the Republic of Korea and Japan put aside historical differences and put at the forefront the stability and security of the region.” On North Korea’s repeated launches of short-range ballistic missiles, General Abrams said they are not conducive to the stability of the Korean Peninsula and are detrimental to the creation of an environment for continuing diplomatic negotiations.