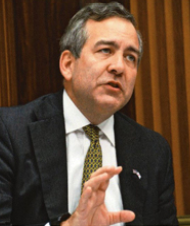 In an interview with the Sankei Shimbun on Nov. 11 in Tokyo, David Bohigian, executive vice president of the U.S. Overseas Private Investment Corporation (OPIC), announced a U.S. policy to enhance support for developing countries in the Indo-Pacific region by drafting principles for infrastructure support with Japan and Australia and expanding the scale of investment. The program will strengthen the Indo-Pacific strategy, which is intended to compete with the Belt and Road initiative, China’s endeavor to create a huge economic bloc. OPIC is a U.S. government agency that conducts assistance to developing countries.

Bohigian announced the launch of the “Blue Dot Network,” an initiative in which the U.S. is joining hands with Japan and Australia to set standards on infrastructure assistance and promote quality infrastructure development in conjunction with friendly nations. The U.S. intends to expand the number of countries participating in the initiative around the core nations of the U.S., Japan, and Australia. “Dozens of countries have already expressed interest,” he said.

Bohigian pointed out differences between the Blue Dot Network and Chinese assistance, which is causing problems due to debt repayment. He stressed that under the Blue Dot Network assistance standards, the initiative will protect the developing nations’ sovereignty, keep them from falling into excessive debt, and provide jobs to local workers. He said the amount of investment would be increased with the expansion of OPIC’s budget resulting from the entity’s reorganization. “We will invest billions of dollars more over the next six years,” commented Bohigian.

Although Bohigian did not pinpoint any countries prioritized in the Indo-Pacific region, he said, “We have consulted with Japan’s Prime Minister’s Office [Kantei] about shared priorities.” “Our partnership with the Japan Bank for International Cooperation (JBIC) is the strongest ever.” JBIC is OPIC’s Japanese counterpart in the Blue Dot Network.