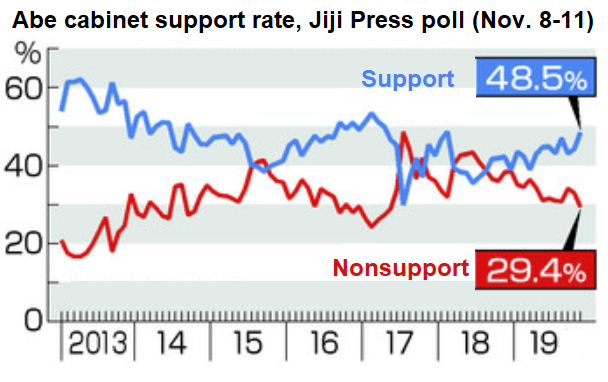 The disapproval rate fell 3.6 points to 29.4 pct, according to the survey conducted for four days through Monday.

The results came despite recent negative developments related to the Abe administration, including the resignations of two scandal-hit ministers in October and the education ministry’s announcement early this month of a decision to postpone the use of private-sector English tests for a new unified university entrance examination system starting in fiscal 2020.

The latest survey was carried out before the government announced Wednesday a decision to cancel next year’s prime minister-hosted cherry blossom-viewing party. The state-funded annual event is at the center of cronyism allegations.

Of the Abe cabinet supporters, 23.0 pct said there is no other suitable politician for the post of prime minister, and 13.1 pct cited Abe’s leadership skills. Among those disapproving the cabinet, 14.3 pct said they have no expectations for it, and 13.8 pct said Abe is unreliable.

The interview-based survey covered 1,986 people aged 18 or over across Japan, except some of the areas affected by powerful Typhoon Hagibis, which hit the nation in mid-October. Valid answers were given by 62.5 pct.