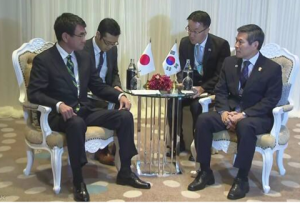 All Monday morning papers highlighted a meeting between the defense ministers of South Korea and Japan and talks involving them and their U.S. counterpart in Bangkok on Sunday. The dailies wrote that despite intense lobbying by Defense Minister Kono and Defense Secretary Esper, ROK Defense Minister Jeong underscored that Japan needs to make concessions in order to maintain the GSOMIA defense information sharing arrangement. He reportedly reiterated an extension would require that Tokyo end its tighter control over certain Korean-bound exports. As Japan does not intend to link the defense pact with its export control regime, the papers projected that GSOMIA will expire on Nov. 23. Sankei quoted a GOJ source as saying: “There is no leeway for us to make concessions. President Moon apparently does not intend to decide [to extend the pact]. Expiration is unavoidable.” Asahi projected that the expiration will make it more difficult for Japan, South Korea, and the U.S. to conduct accurate and timely analysis of DPRK missile launches.

The papers said that while ROK defense authorities are willing to maintain GSOMIA in the face of U.S. pressure, the Blue House appears adamant about its cancellation. The dailies speculated that President Moon would not be able to make an about-face and extend the intelligence accord at the last minute given that a majority of Koreans, especially his progressive supporters, are in favor of ending it. The papers predicted that Moon would “lose face” and his political fate would be jeopardized if ahead of the general election next April he were to decide against the termination without obtaining concessions from Japan. 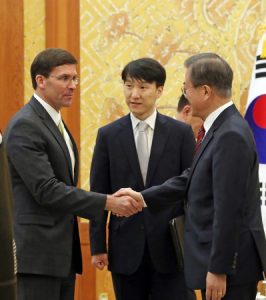 The Saturday editions of all national dailies reported from Seoul on Secretary Esper’s meetings with President Moon and Defense Minister Jeong, saying the ROK officials effectively turned down the Secretary’s request for South Korea to extend GSOMIA. The Secretary stressed the importance of maintaining GSOMIA, adding that its expiration would benefit the DPRK and China. However, President Moon said in reply that extending the agreement would be difficult as long as Tokyo maintains tighter controls over certain Korea-bound exports, arguing that South Korea cannot share military intelligence with Japan since the nation declared that South Korea is “unreliable” when implementing the new export control measures.

Asserting that the Trump administration is poised to link the GSOMIA issue to ongoing negotiations on host nation support, Yomiuri claimed that an idea has emerged within the ROK government on extending the accord while suspending actual data exchange for the time being in a bid to head off U.S. pressure. Sunday’s Yomiuri claimed that the GOJ decided on Friday not to heed the Korean demand for easing its export control in exchange for GSOMIA continuation, adding that this “final decision” was conveyed to the United States.

Nikkei asserted that the Trump administration’s distrust of the Moon administration runs deep, conjecturing that if GSOMIA expires, Seoul will pay a “high price” in the form of having to pay more for hosting U.S. troops. Asahi said the GSOMIA issue has now developed into a “problem between Washington and Seoul” because the Japan-ROK intelligence pact sits at the core of the trilateral security regime. The paper claimed the U.S. view is that a statement from Japan saying that it considers South Korea to be a “reliable security partner” would be helpful in persuading Seoul to extend GSOMIA. A source close to the Blue House also reportedly told the daily that the ROK government does not necessarily expect Japan to relax its tighter export control at this stage and that the ROK government might be able to extend GSOMIA if Tokyo were to simply make an announcement that it is willing to hold consultations on the matter.

Sankei wrote that the GOJ is displeased because the Moon administration appears to be “underestimating” the nuclear and missile threat posed by North Korea, quoting a Defense Ministry source as saying that discussions between the defense authorities of Japan and the ROK on GSOMIA will be “useless under the anti-Japanese president.”  Mainichi quoted an unnamed MOD official as saying that the issues of GSOMIA and export control cannot be resolved without settling first the requisitioned worker dispute.