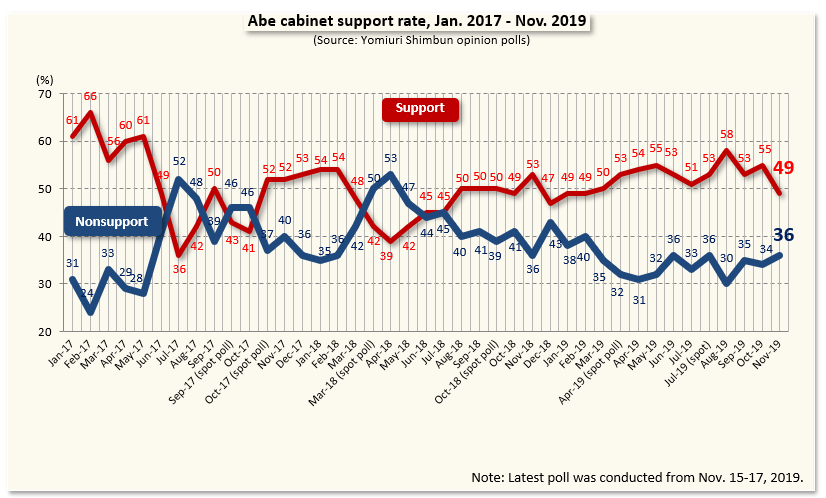 According to a nationwide opinion poll conducted by Yomiuri Shimbun on Nov. 15–17, some 49% of pollees said they support the Abe cabinet, down 6 percentage points from the 55% found in the previous poll (conducted on Oct. 18–20). This is the first time in nine months since February this year that the support rate has dropped below the 50% mark. The nonsupport rate was 36% (previous poll: 34%).

Asked why they do not support the cabinet, 45% of nonsupporters said “because the prime minister is untrustworthy,” a substantial increase from the 35% who gave that response last month. Abe is under criticism for inviting many of his supporters to the cherry blossom-viewing party he hosts every year, and this is thought to have impacted this finding. The government has decided to cancel next fiscal year’s cherry blossom-viewing party. Asked for their views on this government move, 51% said that canceling the event was appropriate while 35% said it was not.

Former Trade Minister Isshu Sugawara and former Justice Minister Katsuyuki Kawai have resigned in the one and a half months since the cabinet was reshuffled in September. Some 52% said that Prime Minister Abe bears a major responsibility in this for having appointed them, exceeding the 42% who thought otherwise.

[Polling methodology: The nationwide survey was conducted on Nov. 15–17 on a computer-aided random digit dialing (RDD) basis and targeted voters aged 18 or over with calls placed to landline and mobile phone numbers. Valid responses were received from a total of 1,051 persons, including 520 persons (out of the 950 households with one or more eligible voters) for landline numbers and 531 persons (out of the 1,082 persons who answered) for mobile numbers. The valid response rates were 55% for landline numbers and 49% for mobile numbers. Figures are rounded off. In some graphs and charts, the total percentage may not add up to 100%. “0” indicates that the figure was below 0.5%, and “–” denotes that no respondents gave that answer.]