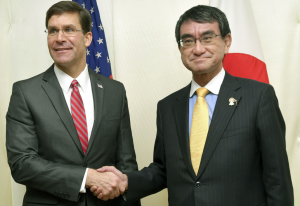 All national dailies reported on the bilateral talks held between Secretary of Defense Esper and Defense Minister Kono in Bangkok on Monday. The papers wrote that the two defense chiefs agreed that the Japan-ROK GSOMIA is important for trilateral cooperation between the United States, Japan, and South Korea. The two officials also shared the view that North Korea’s ballistic missile launches pose a serious threat to regional security. Kono told reporters afterward it is important for the three nations to further strengthen their coordination in view of the threat posed by the DPRK. Mainichi wrote that Secretary Esper also told the press he and Kono discussed a range of issues. According to Asahi and Yomiuri, Chief Cabinet Suga separately told the press in Tokyo that Japan is preparing for the possible expiration of the defense intelligence sharing pact with U.S. cooperation but will continue to ask South Korea to act prudently. Yomiuri interpreted this as an expression of the view that the impact of the expiration of the pact on Japan will be limited.

Asahi, Mainichi, Nikkei, and Sankei wrote that Kono explained to Secretary Esper Japan’s plan to send SDF assets to the Middle East and the Secretary reportedly welcomed the plan as an effort to contribute to the peace and security in the region. Mainichi and Nikkei wrote that Kono told the U.S. defense chief that Japan will not participate in the U.S.-led coalition but will take appropriately measures of its own. Sankei added that the two officials confirmed the plan to continue making efforts to achieve a “free and open Indo-Pacific.” According to Nikkei, Secretary Esper told the press the alliance between the United States and Japan is strong.

Mainichi wrote that Kono brought up the parachute drop exercises at Kadena AB, misconduct by Iwakuni-based pilots, the accidental release of a dummy bomb from a Misawa-based fighter jet, and other matters involving the U.S. military. The Japanese minister called on Secretary Esper to ensure that the U.S. military thoroughly implements safety measures, promptly reports incidents and accidents to the Japanese government, and complies with bilateral agreements, stressing that residents’ understanding is indispensable for maintaining the U.S. forces’ stable deployment in Japan. The paper added that the two officials agreed that unilateral attempts to change the status quo are unacceptable and confirmed that the United States and Japan will continue to work together to ensure the rule of law and freedom of navigation, apparently with China in mind.