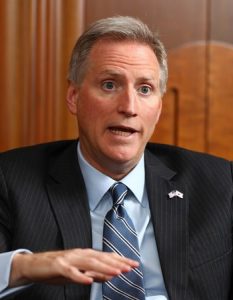 Jiji Press filed a report on its interview on Wednesday with Chargé d’Affaires Young. The wire service said the Chargé expressed the U.S. government’s intention to continue to urge South Korea to maintain its GSOMIA defense intelligence sharing pact with Japan ahead of its planned expiration. Chargé Young said GSOMIA allows the United States, Japan, and South Korea to effectively coordinate with each other especially during contingencies. Concerning future discussions between Washington and Tokyo on Japan’s spending for hosting U.S. troops from fiscal 2021 and beyond, the Chargé reportedly stated that as President Trump has indicated, the United States will ask its allies to take on a fair and reasonable share of the security responsibilities. The Chargé welcomed Japan’s plan to dispatch SDF assets to the Middle East.