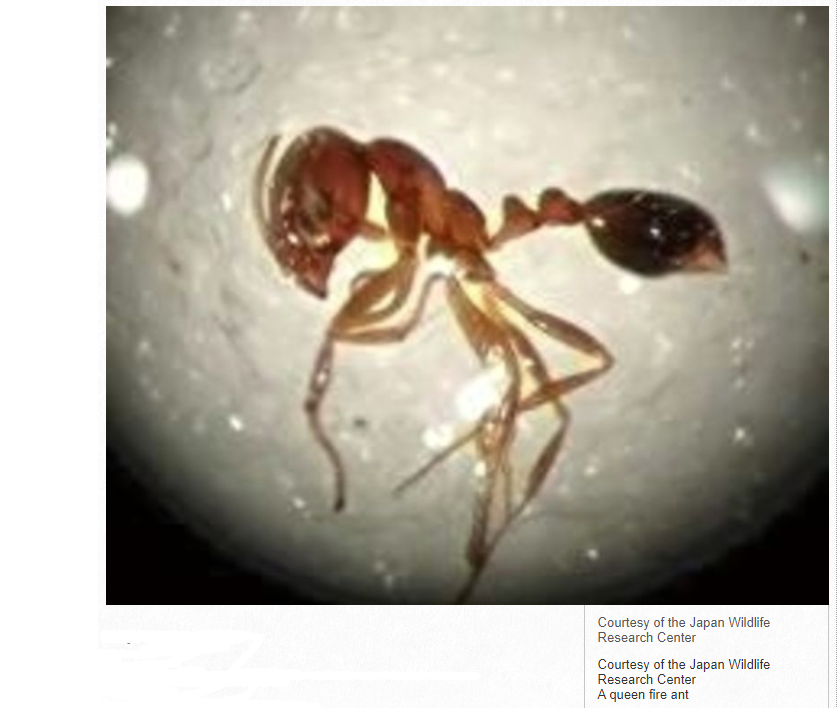 About 70 percent of venomous fire ants (see below) that have been confirmed in Japan were found to have come from containers on ships that departed Chinese ports, it has been learned.

According to materials released by the Environment Ministry, a total of 12,000 fire ants have been found in Japan, and about 8,000 of them came from China. The government is expected to ask the Chinese government to cooperate in border control measures and other aspects at a tripartite environment ministers meeting among Japan, China and South Korea that will begin Saturday.

In October, more than 50 queen fire ants, which can lay eggs, were found and eliminated at Tokyo Port. There is a possibility that some of them flew to other places, though. The ministry is increasingly concerned that the fire ants could spread in the country.

Most of the containers and other cargo from China, from which a total of 8,000 fire ants were found, had departed from southern Chinese ports, including the Port of Xiamen in Fujian Province and the Port of Shekou in Guangdong Province. Most of the remaining 4,000 ants were found outside of containers, such as on the ground on piers, and their places of origin have not been confirmed.

Most of the containers carrying fire ants have come from China, apparently because Chinese containers are in short supply and aging due to increased imports and exports.

According to the Finance Ministry, the volume of Japan’s imports from China surpassed ¥10 trillion in 2004 and reached ¥19 trillion in 2018. Yoshiaki Hashimoto, associate professor on myrmecology at the University of Hyogo, said, “In China, it is not rare to use containers on the brink of being discarded, where fire ants often make their nests.”

At the 2018 tripartite environment ministers meeting, Japan asked China to take such countermeasures as putting feed containing insecticidal components in containers when exporting them. However, China did not take such measures citing that it is difficult to put chemical agents in containers due to domestic regulations and other reasons. The Japanese side plans to urge China to thoroughly implement measures against fire ants and strengthen the sharing of information at the upcoming tripartite environment ministers meeting to be held Saturday and Sunday in Kitakyushu and on other occasions.

A senior official at the Environment Ministry said: “In addition to measures by China, it is also important to strengthen patrols at domestic ports to thoroughly eliminate fire ants. We should ask port officials and importers for further cooperation to prevent fire ants from spreading in Japan.”

A red-brown ant with 2.5 to 6 millimeters long. These ants build bowl-shaped anthills about 30 to 40 centimeters high mainly in sandy areas that are inhabited by a queen and several thousands to several hundreds of thousands of worker ants. A fire ant has a stinger on its abdomen, and if someone is stung, the body part hurts like burning, possibly leading to allergic reactions resulting in death. Fire ants first spread from South America to North America, and then all over the world in the 2000s. Excluding South America, fire ants are confirmed to inhabit the United States, China, Taiwan and Australia.