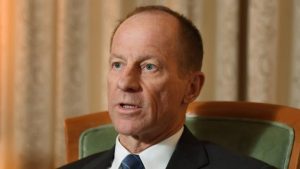 Monday’s Nikkei printed an interview with Assistant Secretary of State Stilwell on Saturday in which he said he was “very concerned” about the situation in Hong Kong since the high degree of autonomy the territory once enjoyed has “diminished.” He suggested that Washington is weighing its options should the situation turn into a violent crackdown like the Tiananmen incident in 1989.

A/S Stilwell welcomed South Korea’s decision to maintain the GSOMIA arrangement with Japan. He added the three partners understand the benefits of trilateral cooperation. While noting Tokyo and Seoul still need to resolve other outstanding issues, such as export control and the requisitioned workers dispute, the U.S. diplomat was cautious about the potential role Washington might play by saying U.S. intervention “may solve things in the short term, but it absolutely will not lead to anything like a long-term solution.” He urged the two parties to work toward resolution on their own.