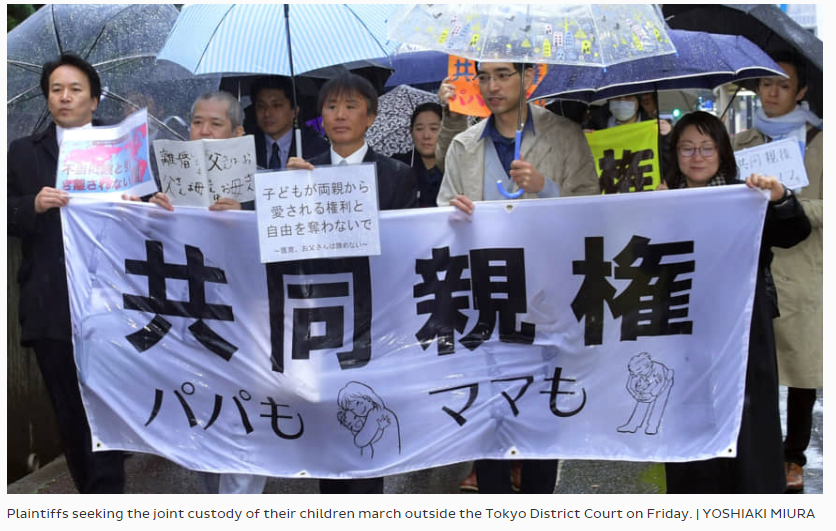 Twelve noncustodial parents from across Japan on Friday filed a liability lawsuit with the Tokyo District Court against the central government, demanding a total of ¥12 million in compensation for failure to guarantee parents their constitutional right to raise their children.

The 12 plaintiffs are also seeking the creation of a joint custody system.

Reiko Koga, a lawyer representing the plaintiffs in the lawsuit, believes the current system is contradictory to each parent’s constitutional right to raise his or her children.

“The current system infringes on parental rights to raise their children and is discriminatory against people who are not married,” she told a news conference at the court on Friday.

She explained that under the current law, articles 818 and 819 of the Civil Code, shared custody is limited exclusively to couples who are married.

Koga referred to Article 13 of the Constitution that stipulates that the people’s “right to life, liberty and the pursuit of happiness” shall be the supreme consideration. She also explained the current system infringes on Article 14, which guarantees equality under the law.

The plaintiffs — one woman and 11 men whose ages range from their 20s to 60s — come from eight prefectures: Tokyo, Hokkaido, Saitama, Nagano, Hyogo, Toyama, Kyoto and Hiroshima.

Each parent in the lawsuit is demanding the government pay ¥1 million in compensation and cover the cost of the case. The plaintiffs lost custody of their children as a result of divorce.

In most cases in Japan, divorced mothers are granted custody. All plaintiffs say they want to actively participate in the care of their kids.

“We hope the lawsuit will result in changes to the Civil Code, which only supports married households and the change will enable parents to have a say in building relations with their children,” said Mitsuru Munakata, 44, one of the plaintiffs from Nagano Prefecture. Munakata said he divorced his wife in 2008 and can only see his daughter once a month.

He said he hopes the lawsuit will help other single parents who have lost custody, as well as offer support to children from such households in dealing with the situation by reassuring them that what happened is between their parents and is not the child’s fault.

Some other plaintiffs said they had been denied access to their children.

Koga rejected opposing claims that the current system helps prevent children from being abused and said such issues are addressed in other laws and regulations. She said, “On the contrary, the existing system allows abusive parents to get custody.”

In response to growing calls in favor of such a system, the Justice Ministry announced in September it will launch a study by the end of the year on whether to introduce a system allowing joint custody of children after their parents get divorced.

Friday’s lawsuit coincided with another Tokyo District Court ruling in which the court rejected 14 parents’ compensation claims over the system’s unconstitutionality.

The plaintiffs sought ¥9 million in damages, arguing the existing legal framework does not allow them proper access to their children.