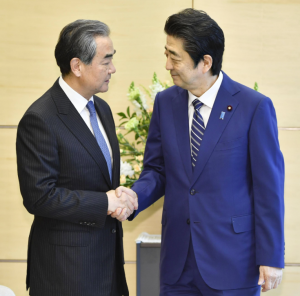 Yomiuri wrote that in separate meetings with Chinese Foreign Minister Wang Yi on Monday in Tokyo, Prime Minister Abe, Foreign Minister Motegi, and Chief Cabinet Secretary Suga all brought up the situation in Hong Kong and expressed Japan’s concern. According to the paper, Abe told Wang it is important for a free and open Hong Kong to flourish under the “one country, two systems” principle. Nikkei said Wang told reporters afterward that any attempts to undermine the stability and prosperity of Hong Kong would fail and that Hong Kong is Chinese territory.