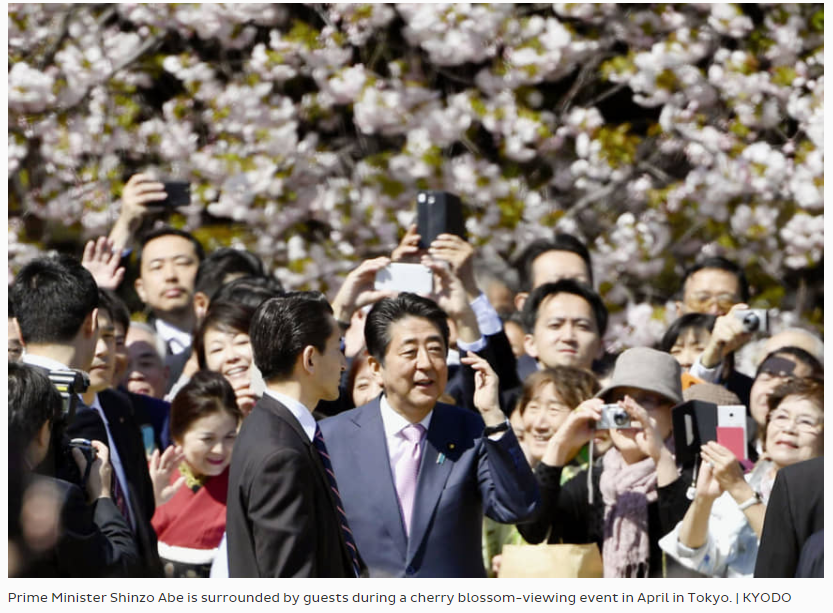 OSAKA – Every year since 1952, the prime minister, via taxpayer funds, has hosted one of the nation’s largest cherry blossom-viewing parties.

But with allegations of cronyism and favoritism surrounding the selection of invitees by Prime Minister Shinzo Abe and his administration, next year’s party has been canceled, and opposition parties are continuing to grill the government in a scandal that shows no sign of ending anytime soon.

What goes on at this annual cherry blossom party and who is invited?

In the past, invited guests were mostly those who had distinguished themselves in the fields of politics, business, arts, culture, entertainment, sports or other areas.

In recent years, it was canceled in 2011 due to the Tohoku earthquake, tsunami and triple meltdown at the Fukushima No. 1 nuclear plant, and in 2012 after North Korea warned that it would fire a ballistic missile.

Why has this party, which has been held for nearly 70 years without much controversy, suddenly become a political issue?

Until Abe returned to power in 2012, the annual parties, regardless of who was prime minister, usually drew less than 10,000 invited guests.

That number began increasing under Abe and topped 15,000 this year, but the actual number of people who turned up was 18,000, including family and friends who accompanied the invited guests, for a price tag of ¥55 million.

With preparations for the 2020 fiscal year budget underway, the Abe administration had planned to earmark more than ¥57 million for next year’s party.

This budget request prompted Japanese Communist Party Upper House lawmaker Tomoko Tamura to ask earlier this month why the government wanted so much allocated to next year’s party. That led to other inquiries into who was invited, and why.

So who was invited, and by whom, to this year’s party?

Of the 15,000 invited guests, Abe has admitted he was involved with selecting up to 1,000 and that the ruling Liberal Democratic Party was given a quota of roughly 6,000 people to invite.

Deputy Prime Minister Taro Aso, Chief Cabinet Secretary Yoshihide Suga and his deputies recommended another roughly 1,000 guests in total, and Aso said he personally recommended up to 200 people. Other ministries provided recommendations for about 6,000 guests.

And did Abe’s wife, Akie, recommend any guests?

Earlier this month, Shoji Onishi, a senior official at the Cabinet Secretariat, told the Diet that, during the process of discussing the large number of people who wanted to participate, there were recommendations from Akie. Suga admitted she made the recommendations but said she was not involved in the screening process that determined who would actually receive an invitation.

Is there a list of this year’s attendees that could answer specific questions about who was invited?

So far no, and that’s a major reason why the issue has turned into a political scandal: Officials have admitted the guest list was destroyed on the same day the list was requested by the opposition.

Yukihiro Otsuka, a Cabinet Office official, told the Diet earlier this month a large shredder used to destroy documents was in heavy use by other government ministries, a revelation that sparked uproar in the Diet and with the media.

When the Cabinet Office further said the reason they couldn’t get the shredder before then was because they couldn’t reserve it, opposition party leaders asked for the reservation list, only to be told that it was not available at the moment.

While officials admit they shredded the paper lists, it’s unclear whether it remains in electronic form.

How is it that the list of those attending a publicly funded party was so easily destroyed?

Current guidelines regarding the handling of public documents state that, in principle, they must be kept for at least a year. However, there are exceptions under which documents can be disposed of in less than one year.

Bureaucrats can determine whether a set of documents falls under one of these exceptions.

Opposition parties and the media have attacked the decision-making process as nontransparent, lacking sufficient political oversight and being vulnerable to abuse by politicians placing pressure on bureaucrats, or by ambitious bureaucrats seeking to curry favor with political leaders.

Why is Abe also under fire for a dinner he held the night before the cherry blossom-viewing party?

About 800 Abe supporters, including many from his home base of Yamaguchi Prefecture, gathered at the Hotel New Otani in Tokyo for a party organized by his political office. They were charged ¥5,000 each, a figure that has been criticized by opposition parties and the media as being far too low, leading to allegations, which Abe has denied, that funding to make up the difference was provided by other sources.

This, in turn, has created questions in the Diet as to whether it was part of an attempt to buy constituents’ votes, and about possible violations of the law.

Has there been political fallout from the scandal?

A Kyodo News telephone survey conducted on Nov. 23 and 24 showed Abe’s support rate at 48.7 percent, down 5.4 points from last month, and that 69.2 percent of respondents said they did not trust his explanations regarding the cherry blossom-viewing party.

Meanwhile, LDP leaders have said passing an amendment to the national referendum law — with the ultimate aim of revising the Constitution — during the current Diet session, which ends Dec. 9, is all but impossible, as the opposition continues to grill the ruling party over the scandal.

There is also some media speculation that Abe may call a Lower House election in January as a way to hopefully garner stronger support for constitutional revision and put the scandal behind him.

However, a snap election runs the risk of ending up with less than a two-thirds majority of lawmakers supporting constitutional revision, which would likely be a death knell for Abe’s long-sought goal of revising the charter before he is scheduled to leave office in 2021.