Government not divulging entire picture of trade deal with U.S. 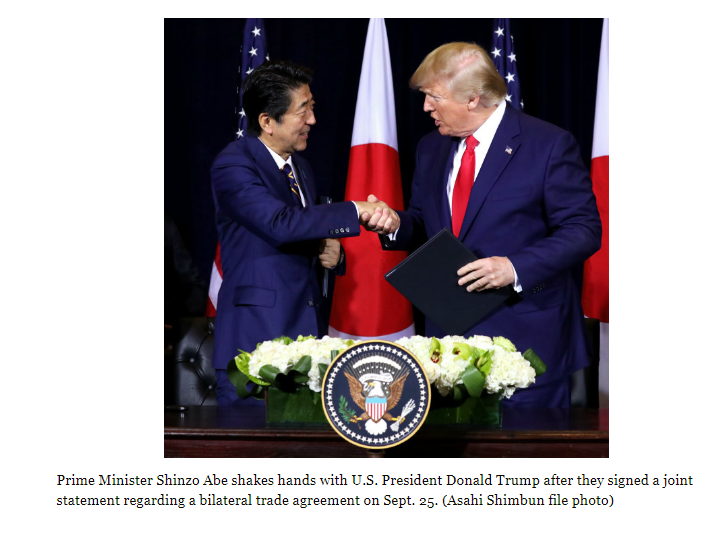 The government appears to have manipulated figures to provide false reassurances to farmers who fear the new trade deal with the United States will flood the Japanese market with agricultural imports.

According to the government, tariffs would be eliminated on only 37 percent of U.S. farm products heading to Japan. But that calculation is based on the number of farm product categories that would have import tariffs erased.

Under the agreement, Japan will retain tariffs on about 1,100 farm products from the United States.

However, for around half of those products, there have been zero imports to Japan, according to import statistics compiled by the Finance Ministry.

The tariffs imposed on many non-existent imports have pushed down the ratio of farm products for which tariffs will be erased.

Actual import monetary amounts could provide a clearer picture about the effects of eliminating tariffs on the U.S. farm products. But the government has never released such figures.

“The procedure is simply too complicated,” a Cabinet Secretariat official explained.

The Asahi Shimbun used documents readily available from the agriculture and finance ministries to calculate the import monetary amounts. The documents contained the list of farm products for which tariffs will be eliminated.

Based on those calculations, tariffs will be eliminated for 61 percent of U.S. farm products entering the Japanese market.

In explaining the trade agreement with the United States on Oct. 27, Kazuhisa Shibuya, an official at the Cabinet Secretariat, said, “Under the Trans-Pacific Partnership trade agreement, tariffs would be eliminated for 82 percent of farm imports, but under the latest agreement, the figure is much lower, and only 37 percent of U.S. farm products will have tariffs eliminated.”

The argument was used to try to convince farmers that tough negotiations with the United States kept the ratio of products for which tariffs will be eliminated at a very low level in comparison with the TPP.

The TPP, which the United States withdrew from under President Donald Trump, would have newly eliminated tariffs on about 650 billion yen worth of farm products. Adding products that were already tariff-free meant that about 71 percent of farm product imports would have no tariffs.

“The government must be well aware that if it released the level based on monetary amounts, the positive results for Japan would become smaller,” said Kazuhito Yamashita, a research director at the Canon Institute for Global Studies who has long followed trade policy. “They manipulated the figures arbitrarily to suit their own purposes.”

(This article was compiled from reports by Hirobumi Ohinata and Hideki Kitami.)