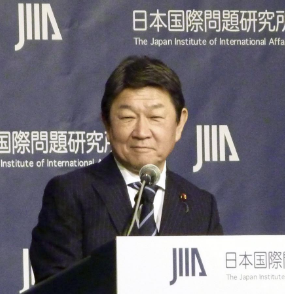 Yomiuri, Mainichi, and Nikkei wrote that Foreign Minister Motegi said on Monday Japan will contribute $3 billion in investment and loans to infrastructure development in ASEAN nations from 2020 to 2022. He made the announcement at a symposium organized by the Japan Institute of International Affairs in Tokyo on Monday. Motegi was quoted as saying the investment plan demonstrates Japan’s policy of promoting free and fair economic development by offering new economic options to every nation in the region. Mainichi speculated the investment plan is intended to strengthen Japan’s cooperation with ASEAN under the U.S.- advocated vision of a “free and open Indo-Pacific” in view of China’s “One Belt, One Road” initiative.

Yomiuri wrote Prime Minister Abe also made remarks at the event, saying Japan will exercise leadership in achieving a “free and open Indo-Pacific” by working with all nations sharing the concept.

Sankei also reported on Motegi’s remarks, adding that following a three-day visit to India over the weekend, the foreign minister will ramp up his diplomatic activities by visiting Sri Lanka, Spain, and Russia this month and ASEAN nations next month. The paper said although Motegi has not traveled abroad other than to India during the Diet session in order to concentrate on deliberations on the U.S.-Japan trade agreements, he plans to actively engage in diplomatic activities after the session ends this week. Motegi is also planning to visit the United States for talks with Secretary of State Pompeo to reaffirm the importance of the U.S.-Japan alliance ahead of the 60th anniversary of the security treaty next year.