Alaskan natural gas “can compete in terms of price,” said Alaska Governor Michael J. Dunleavy in an interview with Nikkei that took place in Tokyo in early November. On the same note, he expressed his hope for the early realization of a plan to liquefy natural gas sourced from the Arctic Circle within Alaska’s territory for shipment to Japan and other destinations. In Alaska, two projects are currently under review to export liquified natural gas (LNG) produced there. The governor is calling on Japanese firms to take part in these initiatives.

U.S. natural gas output continues to rise thanks to the shale gas boom there. LNG shipments from the Gulf of Mexico and the East Coast have jumped rapidly. Alaska is also rich in natural gas and is located close to Asia, a big consumer of LNG. However, the pace of commercialization of gas projects there has been slow. The transportation distance by sea from Alaska is less than half of the distance from the Gulf of Mexico. “The North Slope (gas field) has massive amounts of natural gas reserves, but these have been left untapped for many years,” said Governor Dunleavy. 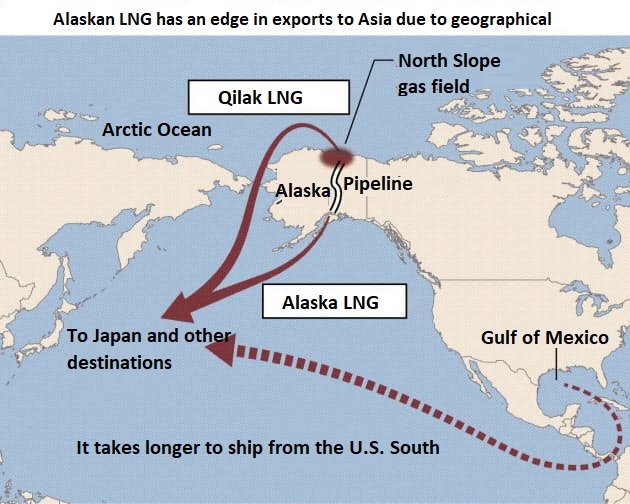 At present, two projects are under review. One is the Alaska LNG Project, which envisages building a 1300-km pipeline and liquefying gas in southern Alaska for shipment. The other project is the Qilak LNG Project, which envisages building a gas liquefaction facility near the gas field for direct shipment. The Qilak project would not require the construction of a long pipeline, but shipping gas from the Arctic Ocean would be a major challenge.

“The government of Alaska seeks to raise profits from resource development and is currently gauging which project would be economically viable,” the governor said. The contract method has not been decided yet. Meanwhile, he mentioned that shipping gas to Asian markets is less expensive and noted that “Alaskan gas can compete in terms of price if the price is linked to the Henry Hub (a U.S. index for natural gas price).”

China Petroleum and Chemical Corporation (Sinopec) and several other organizations signed an agreement on joint development in the Alaska LNG Project when U.S. President Donald Trump visited China in 2017. The project has since become stalled amid escalating trade tensions between the U.S. and China, but the project “has not vanished yet,” he said.

China, which is the world’s second largest LNG importer after Japan, has imposed a punitive duty on U.S. LNG in retaliation for tariff sanctions slapped by the U.S. Trump administration. On the impact [on the Alaskan project], Governor Dunleavy noted that the “U.S. has a competitive edge in many resource projects across the world and we hope the U.S. and China will reach an agreement promptly.”

U.S. goods subject to China’s punitive tariffs also include seafood, the main item exported from Alaska. “The tariffs are hampering [our seafood shipments],” he said. Wild salmon is more 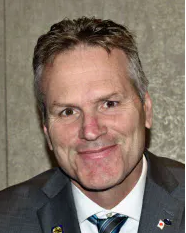 expensive than farmed salmon, but “demand is high because of the quality,” he added.

Governor Dunleavy also urged Japan to lower tariffs on seafood. “Japanese tariffs are pushing product prices up and hurting demand,” he said. On the same note, he also noted that “U.S. Trade Representative Robert Lighthizer also recognizes this point and is holding consultations with Japan.”

There are concerns that a delay in the Alaskan LNG projects could make the projects more costly. The projects under review would entail the difficult process of building a long pipeline and shipping gas in the extreme cold weather, which is unique to the Arctic Ocean. Japan is the world’s largest LNG importer, but consumption has leveled off. Against this backdrop, LNG resale to other Asian nations and arbitrage trading are gaining steam. While Japan is seeking to diversify its LNG procurement sources, it must size up the cost effectiveness of new investments.