Japan to set up $450m fund to subsidize young scientists 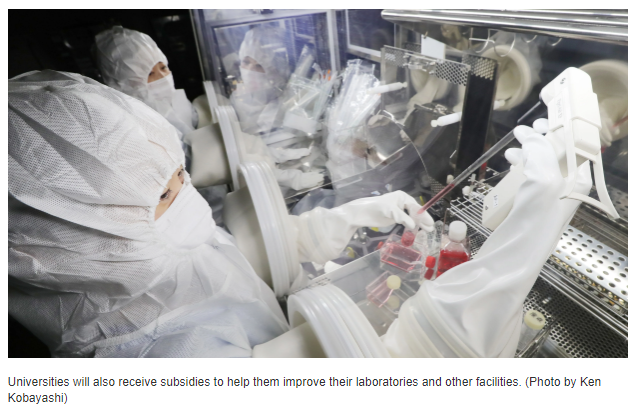 TOKYO — The Japanese government will set up a fund of about 50 billion yen ($458 million) to provide young researchers with financial security and kick-start a new round of technological innovation.

The plan is to provide an average of 7 million yen to individual researchers a year, expandable to about 10 million yen. The subsidies are meant for researchers age 40 and under, in principle.

Young researchers in Japan often find themselves in unstable, limited-term jobs. The subsidies are aimed at encouraging these scientists to take up new challenges, and to help ignite a new wave of technological innovation.

The fund will be included in an economic policy package currently under discussion. Over the course of the program, about 700 researchers, mostly in scientific technology, are expected to take part. The recipients will be selected over a period of three years.

Officials plan to provide an annual 6 million yen to 8 million yen per researcher. In addition, the researchers’ universities will be in line for about 30% of what their researchers are awarded.

The subsidies will be provided over seven years in principle, but the period can be extended to 10 years.

After completing their doctoral degrees, Japan’s young researchers face a scarcity of stable jobs. The age of postdoctoral researchers averaged 36.3 in fiscal 2015, up from 33.8 in fiscal 2009.