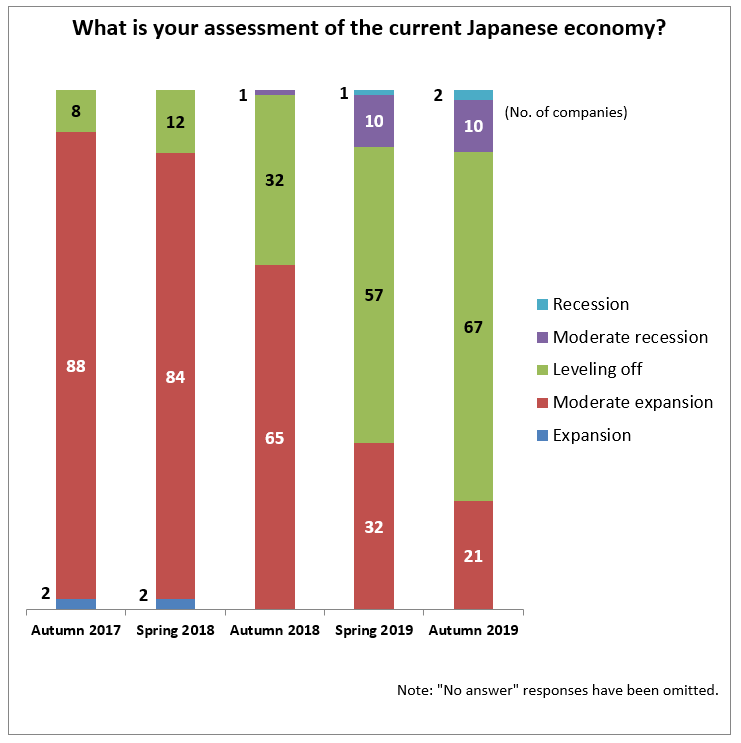 By Mana Takahashi and Takashi Yoshida

In the Asahi Shimbun nationwide survey of 100 leading companies, 67 companies said that the current domestic economy is “leveling off,” up from the 57 companies who gave that response in the previous poll conducted in May and June this year. Add to that the companies that said the economy is in “recession,” and almost 80% of companies said the economy is weak. Business confidence among the companies surveyed has continued to deteriorate since last year, and the fall remains unchecked as companies are anxious about both internal and external demand, citing the slump in consumption due to the consumption tax hike and the prolongation of the U.S.-China standoff over trade as causes for concern.

The 79 companies who said the domestic economy is “leveling off,” “in a moderate recession,” or “in a recession” were asked to give up to two reasons for their assessment. The most frequently given response was “personal consumption” (45 companies). It seems that many companies are concerned about the impact of the October consumption tax hike. Other frequently cited responses were “corporate profits” (35) and “exports” (24).

All 100 companies were asked to cite up to two causes for concern for the domestic economy going forward. In response, 69 companies said the “future of the overseas economy” and 50 companies said “stagnation in personal consumption.”

[Polling methodology: The survey was conducted of 100 leading Japanese companies nationwide on Nov. 11–22, 2019. Interviews were conducted with top executives at 40% of those 100 companies. Some companies did not answer some questions so the total number of companies does not total to 100 for each question. Questions and answers have been abbreviated in some cases.]