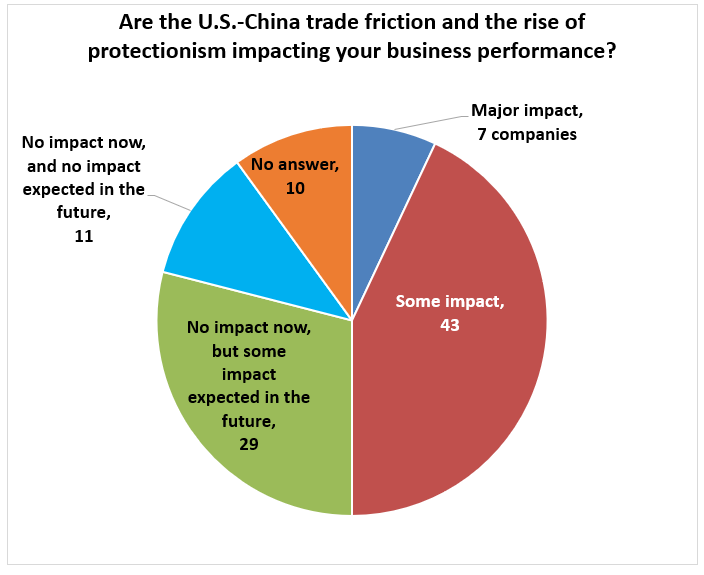 The Asahi Shimbun nationwide survey of 100 leading companies revealed that the fluctuating world situation is having an adverse impact on company management.

Trade protectionism is rising in the U.S., and the U.S. and China are exchanging blows in the form of additional tariffs. Asked whether the U.S.-China trade friction is impacting their business performance, a total of 50 companies said it is, up dramatically from the 36 companies giving that response in the previous poll [taken in May–June this year]. The number of companies saying “they have not been impacted so far but are likely to be impacted somewhat in the future” dropped from 44 to 29. Overall, these statistics suggest that the impact is actually spreading.

Yaskawa Electric Corporation reported that the U.S.-China trade friction is exerting a “major impact” on their company. Company president Hiroshi Ogasawara says, “We built a new factory to make controllers for industrial equipment in China, but orders are not increasing in the way we had anticipated. We may postpone the installation of production equipment.”

Asked if they have reviewed their supply chain or business strategy with the standoff between the United States and China, 15 companies said they had, up from 9 in the previous survey. Toshiba President Satoshi Tsunakawa says, “We are working to prevent the U.S.-China situation from having an impact on us as much as possible. We are shifting our suppliers and manufacturing bases from China to ASEAN countries and passing on some of the cost increase from the tariffs to customers.”

The number of companies saying that they” have not reviewed their supply chains or business strategy and do not plan at present to do so” dropped from 42 in the spring poll to 34. Meanwhile, 23 companies said in the recent poll that they are “considering” doing so.

The deterioration of Japan-ROK ties is also impacting the economy. Asked if the chilly ties between the two nations is impacting their business performance, 24 companies said, “It is having some negative impact,” and three companies said, “It is having a very negative impact.” Another four companies said that “it is not exerting a negative impact now, but it looks like it will in the future.” JTB said that the deterioration in ties is having some negative impact on its business. The company added that applications to travel from the ROK to Japan have declined by 80% while those for travel from Japan to ROK have declined 60% to 70%. Managing Executive Officer Yuji Kato says, “We would like to promote exchange among the private sector. We will take concrete measures going forward.”

[Polling methodology: The survey was conducted of 100 leading Japanese companies nationwide on Nov. 11–22, 2019. Interviews were conducted with top executives at 40% of those 100 companies. Some companies did not answer some questions, so the total number of companies does not total to 100 for each question. Questions and answers have been abbreviated in some cases.]