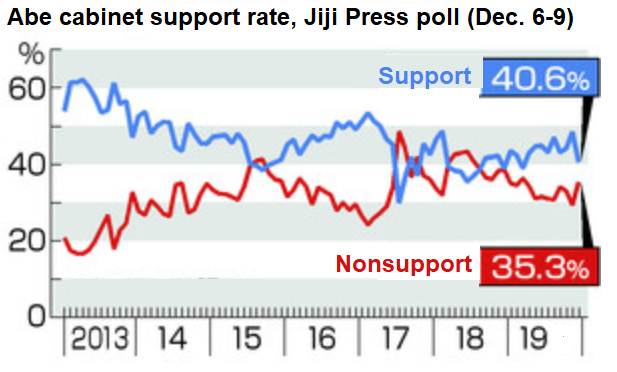 The disapproval rate rose 5.9 points to 35.3 pct, according to the survey conducted for four days through Monday.

The drop in the approval rate is the steepest since the 9.4 point decline in March 2018, when the Abe administration had been grilled by the opposition camp at the Diet, Japan’s parliament, over a document-tampering scandal relating to the sale of a state-owned land plot to school operator Moritomo Gakuen.

The latest survey results are also believed to have reflected controversies over a prime minister-hosted annual cherry blossom-viewing party. Abe invited many of his supporters to the parties, and a letter of invitation for the 2015 party was sent to the then chairman of multilevel marketing firm Japan Life Co., which went bankrupt in 2018 after collecting massive amounts of money from customers.

The survey found that 73.3 pct of respondents support the government’s decision to cancel next year’s cherry blossom-viewing party, while 13.0 pct opposed the move. The proportion of respondents who said the party should be abolished altogether came to 60.2 pct, while 22.6 pct said there is no such need, and 17.2 pct said neither or were unsure.

Respondents were asked whether the government of Abe, who recently became the country’s longest-serving prime minister in terms of the total number of days in office, surpassing the previous record of Taro Katsura in the early 1900s, is showing signs of carelessness. The share of those who answered yes came to 68.6 pct, while 14.2 pct said no, and 17.2 pct said either or were unsure.

When asked whether the Abe administration is suitable to be the longest-serving government, 29.0 pct said they think so, while 37.5 pct said they do not think so.

Among the Abe cabinet supporters, 22.5 pct said there is no other suitable politician for the post of prime minister, 10.1 pct cited Abe’s leadership skills and 7.6 pct pointed to his reliability. Among those disapproving the cabinet, 21.4 pct said Abe is unreliable, up 7.6 points from the previous month, followed by 13.4 pct who said they have no expectations for the cabinet, and 11.3 said his policies are bad.

The support rate stood at 2.0 pct for both the Japanese Communist Party and Nippon Ishin no Kai (Japan Innovation Party), 0.7 pct for Reiwa Shinsengumi, 0.6 for the Democratic Party for the People, 0.3 pct for NHK kara Kokumin wo Mamoru To (the party to protect the people from NHK, or Japan Broadcasting Corp.), and 0.2 pct for the Social Democratic Party.

The share of respondents who do not support any party grew by 5.6 points to 61.1 pct, reaching 60 pct for the first time since March.

The interview-based survey covered 2,000 people aged 18 or over across Japan. Valid answers were given by 61.4 pct.