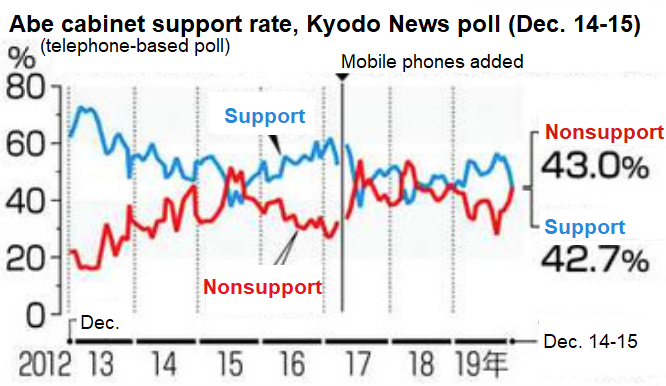 The disapproval rate stood at 43.0 percent, up from 38.1 percent and topping the support rating for the first time since December 2018, the survey showed.

The sharp drop in the support rate followed a decrease of 5.4 points in November. It was the first fall of 10 points or more in two consecutive polls since February and March 2018, when Abe was embroiled in a scandal linked to cronyism allegations over a sale of state-owned land.

In the nationwide telephone poll conducted over the weekend, 83.5 percent of respondents said Abe’s explanation regarding the annual state-funded cherry blossom event was insufficient.

Abe has been accused of using the event for personal gain by entertaining hundreds of his supporters.

As a long-standing practice, a prime minister and some within the Cabinet can make recommendations before the government draws up the guest list for the ruling party. The event is intended to honor people such as athletes and celebrities for their accomplishments.

The survey also showed that 61.5 percent opposed Abe serving a fourth consecutive three-year term as head of the ruling Liberal Democratic Party, while 28.7 percent supported the extension of his stint as LDP president beyond the end of his current term in September 2021.

While LDP rules only allow a president to serve three consecutive terms, some senior party lawmakers have voiced support for a change to allow Abe to remain in his post so he can pursue the first-ever amendment of Japan’s Constitution.

According to the survey, 51.5 percent opposed the government’s plan to send Self-Defense Forces personnel to the Middle East, while 33.7 percent expressed support.

The Cabinet is set to approve on Dec. 23 a draft plan by the LDP to send SDF personnel to the Middle East to ensure the safety of commercial shipping and for intelligence-gathering and research purposes.

Sending SDF personnel overseas is a sensitive issue in Japan, given that engagement in a foreign conflict would violate the country’s war-renouncing Constitution.