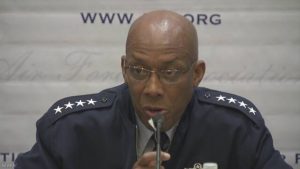 NHK reported this morning that PACAF Commander Brown said on Tuesday that he anticipates “some kind of long-range ballistic missile as a gift” from North Korea since North Korea has warned that it will send a “Christmas gift” if the U.S. fails to meet the DPRK’s year-end deadline for concessions in the denuclearization talks. According to NHK, Gen. Brown also said various things could happen, pointing out that North Korea might declare the resumption of test launches of long-range ballistic missiles but not actually launch a missile. He reportedly stressed: “Our job is to backstop the diplomatic efforts. And if the diplomatic efforts kind of fall apart, we’ve got to be ready.”