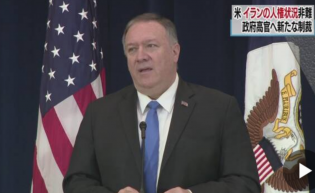 NHK reported this morning that the USG announced a fresh round of sanctions against Iran on Thursday, noting that Iranian President Rouhani is scheduled to visit Japan starting today. According to the network, Secretary of State Pompeo delivered a speech at the State Department on Thursday in which he strongly criticized the Iranian authorities for possibly killing more than 1,000 people in a crackdown against anti-government protesters last month. The Secretary was quoted as saying: “Iran’s human rights violation is the worst and unacceptable. They’re evil, and they’re wrong.” The Secretary reportedly disclosed that under the new sanctions, the assets of two Iranian judges who handed down harsh sentences to human rights activists will be frozen and the issuance of visas to senior Iranian officials who were involved in the crackdown and their families will be limited. The network also quoted the Secretary as saying: “If the regime of Iran respects the rights of all Iranians and abides by its commitment, it can shed the black label of being the outlaw regime in the eyes of the world…. And when leaders of sovereign nations put their interests and the interests of their citizens first, our partnerships will be stronger.”